I did a 36 hour whirlwind trip to Palm Springs this weekend for a very small part of Palm Springs Modernism Week. My last visit was 12 years ago. I should have planned for three or four days, as there’s so much to see. Next time! 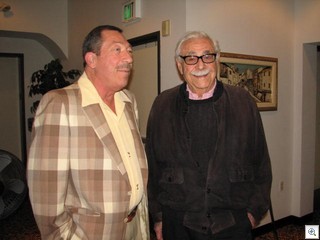 Sunday night was the world premier of the new documentary on William Krisel, Architect.

It turns out, I got to play a role in the film. The film does a great job of telling Bill Krisel’s story, and telling of his philosophy of architecture, and at the end, there’s segment about his Paradise Palms homes in Las Vegas, and the new wave of appreciation for them. That’s where I came in. The “Alexanders” – 1000’s of home in California that were designed by Bill Krisel are already hot commodities among the modernist revival movement. The better preserved, or better restored, the more valuable. Las Vegas has the only group of them that are relatively undiscovered, and that was one of the points I was able to make in the film. The other point is that the houses are desirable for both the baby boomers coming back to our childhood homes, or the kids and grandkids of the boomers who have discovered that there’s something else besides Tuscan Tile Roofs and Suburban Stucco.

I had the opportunity to meet him and speak to Bill, both before after the movie.  which is significant to me, because he’s the architect who actually drew the floor plans and elevations that we are currently publishing in the Paradise Palms Brochure Series.

From my brief conversation, I learned that he never came to Las Vegas. Irwin Molasky, the developer of Paradise Palms was friends with Bob Alexander, who was building in Palm Springs. When Irwin saw the Krisel homes, he commissioned Bill to create a set of them for Las Vegas. 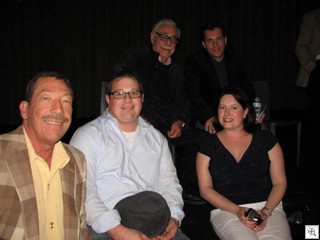 Probably the most important thing I learned from the film, and the conversation, is that the consumer public NEVER heard of the architects of tract housing. A few famous architects who did custom work had their name in the public – Lautner, Neutra, etc – but it was the builders names that were attached to the tract products. Bill Krisel was famous in California among the builders and developers, and he produced plans for more that 40,000 buildings during his career. It’s only in the last 10 years that his name surfaced in the modernist revival community. That’s when he acquired the cult following of affectionados of his work.

After the question and answer period, I was able to grab a picture with Paradise Palms residents Zane and Jenny Donaldson who had also driven down for the premiere. In the background next to William Krisel is Jake Gorst, the director of the film who was on the panel. I’m not sure where Alan Hess was at the moment, but he was on the panel as well.

The DVD of the documentary will be available in about a month, after the Los Angeles Premier at the Getty Museum. We have the wheels in motion for a “LAS VEGAS MODERNISM” weekend in October, which will feature a screening of the film here.