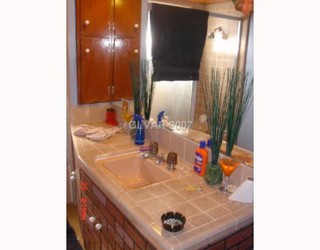 As part of our Birthday celebration, we’re taking you back to the first one I published.

I had it on the blog for about 12 hours. I didn’t realize that the property it came from would be so easily identifiable to someone, and I got a call to complain. I was told that I was going to be reported to the board, and to the seller. I pulled it down in a panic.

A few weeks later, it was still on the MLS (AND STILL IS TO THIS DAY, even though the home has been vacant for 6 months and is now a short sale foreclosure). The rest of the pictures from this MLS are also awful.

A few weeks later, I discovered that I wasn’t the first person to think up “Worst MLS Photo of the Day. Athol Kay in Connecticut has been doing them for a few months longer than me, and I started to send him some of my worst ones. He’s published several of them along the way. His Commentary is decidedly of a different nature than mine, and always worth reading also.

Don’t forget we’re going to have a BIRTHDAY PARTY on Thursday March 6 from 5:30 to 6:30 at the Downtown Cocktail Room. 111 S. Las Vegas Blvd. I’m buying your first drink and the birthday cake. There’s usually some pretty good munchies there also.