Might as well bring them back. If you’re a fairly new reader, you might want to check out the HUNDREDS of them that I published in a long series. The last one was just over a year ago on July 3rd, 2009.

I’ve been totally slammed since before the holiday weekend. I truly thought I could take 2 days off last Sunday and Monday, but the world just wouldn’t let me. It also left me no time or energy to blog some more as I’d promised. This way at least I get something posted to keep you interested.

Back when we were running this series, there were only 8 photo slots for the MLS. Often there weren’t any pictures at all being shown. Then they changed the rules and required at least one. Then we often got ONE and ONLY one. Then they upped it to 16 available picture slots, and eventually to 25. Now we have 3 times the opportunity to find bad pictures. This might be fun again. 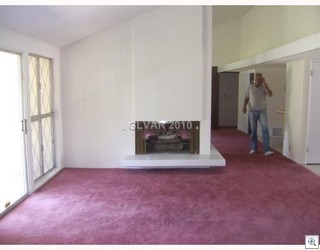 Let’s start out with an easily identifiable KRISEL design home in Paradise Palms. It’s a Model 8, on the golf course. It’s for sale for 225,000. AND it’s not a SHORT SALE or an REO.

The man in the picture isn’t as easily recognizable. I still haven’t decided if he’s taking picture into a mirror, or if he merely stepped in front of the shot while someone else was taking the picture.

People in the pictures is just one of the dozen categories of things agents do wrong. A better angle would have been from about 5 feet to right. Then it would show that it’s a peninsula fireplace separating the living room from the dining room, and would show more of the “wall of glass” with the view out to the golf course.

The only thing worse than a bad picture is no pictures at all.