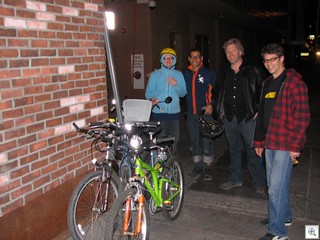 So a funny thing happened last week after the Save The Huntridge Theatre meeting at the Downtown Cocktail Room. As I walked out, I practically bumped into a small group who were securing their bicycles at their first stop of the evening. They were going bar hopping and sight seeing in the Fremont Street Entertainment District, and were doing it on their bicycles. How totally urban can you get?

I already knew Steve Spann, one of the better known Downtown artists, as well as Wes Isbut, the owner of the Arts Factory. I cracked a joke about how happy I was to see the new Las Vegas Urbanism in action.  I had no idea who the young couple was, and meant to call Wes to get their names so I could post this picture.

Today, I stopped in during the inspection of 1720 Bracken, and met the buyers for the first time. The first thing out of his mouth was “Why didn’t you post the picture of us and the bicycles when you ran into us last week at the DTR?”.

Then it dawned on me. The new buyers are the same mystery couple from last week. They’re already part of the Bike Club, (which I need to get more information about) and already immersed in the new Las Vegas Urbanism.

So we’ll take the opportunity to welcome Francine and Ernie to Vintage Vegas, and congratulate them on stepping to the plate and grabbing one of the great homes.