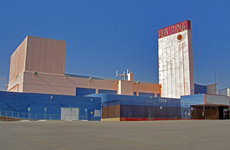 Our Guest Blogger today discusses the past present and future of the Huntridge Theatre. After a meeting which we reported on 2 weeks ago, the attendees believed that the owner was seriously working with us to find a profitable adaptive use for the the Huntridge. At least he said he was going to. But, as I write this, the owner and his lawyers are in Carson City, still trying to have the restrictive covenants removed. Many of us don’t consider that to be a sign of good faith on his part.

In the early part of the 1990’s the vulnerable Huntridge Theatre became a focus of intense community attention. Many believed that the theatre was in danger of being demolished due to the lack of awareness of its historical significance. Early discussions began taking place and various solutions were presented. The final solution would be to seek funding from the State of Nevada Commission for Cultural Affairs. Beginning in 1993 through fiscal year 2007 the commission has awarded 86 grants totaling over 35 million dollars for preservation projects through out the State of Nevada.

From the very inception of the grant program in 1993, the Huntridge Theatre began applying for and receiving funding. The theatre received grants consistently from 1993 until 2001 totaling $1,586,872.54. The grants received were used to rehabilitate the building and adaptively reuse the facility both as a movie theatre and a concert venue. In 1995 the main roof over the auditorium collapsed due to age and was restored in 1996.

The Alternative Music Scene and the Huntridge…

Through the 1990’s the non-profit Friends of the Huntridge, the organization entrusted to manage and program the theatre, attempted to bring quality performances and festivals to the venue. The Huntridge Theatre was mainly used as an alternative concert venue and had several early successes with Alternative Rock and other types of stylistically similar music genres. Alternative Rock was much in vogue throughout the 1990’s and Las Vegas was becoming the hotbed of this musical movement. It had even been reported that Las Vegas could be the next Seattle. Local bands like 12-Volt Sex and Ataboy Skip were beginning to receive attention both regionally and in some cases nationally. In 1997 the University of Nevada, Las Vegas radio station KUNV was awarded the Best College Station of the Year during the yearly Gavin Awards in New York City for its signature program “Rock Avenue.” Rock Avenue was the only radio program in Las Vegas that featured local rock bands and alternative music. The award winning program was run by two well known Las Vegas locals John “Ducky” Slaughter and Ryan “Tiger” Kinder. Both these program directors were the last of a famous lineage of program directors from KUNV. The most famous program directors the radio station ever had were Las Vegas natives Scott Kirkland and Ken Jordan the dynamic duo of the legendary electronic group the Crystal Method.

Though many early successful concerts and programs were brought to the theatre during those years the venue had trouble maintaining a steady cash flow.
Much speculation has occurred as to why the management had trouble programming the venue. Some have reported that the opening of the Hard Rock Hotel with its very successful theatre “The Joint” was one of the most significant factors. Others have speculated that mismanagement by the Friends of the Huntridge played a role. Though no one factor can be pinpointed for the eventual failure of the organization it can be surmised that a combined list of factors probably led to the theatre eventually closing.

In an attempt to make the venue profitable the Friends of the Huntridge tried to diversify the use of the building by making physical changes to the historic fabric of the theatre. The first significant change was to create a large fly space above the proscenium that could be used for theatrical performances. The second attempt was to change the original projection room and second floor environs into a state of the art recording studio. The third and most significant change was the removing of the original seating and the flattening of the auditorium. The reason the latter was done was to make the venue into a potential banquet hall.

Unfortunately, these three important physical changes did little to stop the wave of losses that had encumbered the organization. Lastly, the City of Las Vegas had to provide emergency funding to keep the theatre from closing all together. It has been noted that the City of Las Vegas did provide funding on several occasions in the early 1990’s and in the early part of the new millennium.

The end of an era…

In 2002 the Friends of the Huntridge realized that the theatre would not be able to maintain its doors opened and a decision was made to sell the property and disband the Friends of the Huntridge. The theatre was sold for less than 1 million dollars to local businessman Eli Mizrachi. Though little is known about the final financial agreements between Mr. Mizrachi and the Friends of the Huntridge what is understood is the new owner has to abide by covenants that are attached to the building. These covenants require the owners of buildings that have received grants from the state for Historic Preservation projects have to abide by conditions set by state law. The covenants attached to the Huntridge require the owner not to demolish or otherwise destroy the historic fabric of the building until a set date in the future. In the case of the Huntridge Theatre the state covenants require the owner to maintain the structure intact until 2017. It has been speculated that there are two other covenants attached to the building from the City of Las Vegas. These other covenants are currently being researched by city staff. Soon after the transfer of ownership occurred the new owner attempted to use the venue for concerts though he also has had little success.

Today the Huntridge Theatre stands as a shell of its former self. Slowly time has taken a toll and the beautiful building that stood poised to change the performing arts in Las Vegas when it finally reopened in 1996 is now shuttered. Vandals and the homeless have been blamed for much of the destruction that has occurred inside the building. Most if not all the original accouterments of the structure are gone and lost to history. The terrazzo floor monogrammed with the Letter “H” is still at the entrance. The tower emblazoned with the Huntridge name in neon with its original font are still standing; the namesake of not just the theatre but the neighborhood that surrounds it. Many of the original Streamline Moderne architectural details of the outside of the building are still present as are some of the details in the interior. Though the building is not what it used to be, the very essence of the structure is still present and when one stands in front of it they are easily reminded of a bygone age an age as recent as the 1990’s.

As of today the Huntridge Theatre is in its most vulnerable moment. The owners have no interest in restoring the structure to its former glory and are more interested in the value of the land below it. On March 21, 2008 Eli Mizrachi and his legal council will be going to Carson City to ask the Commission on Cultural Affairs to repay the grants that have been awarded to the Huntridge for its refurbishment. If the commission decides to grant Mr. Mizrachi his wishes and accepts the repayment of the grants then the future of the theatre is very bleak. Furthermore this decision will have long lasting ramifications for preservation efforts all over the United States. It is our hope that the State of Nevada Commission on Cultural Affairs will not permit Mr. Mizrachi to be released from these important covenants and that Mr. Mizrachi embraces the wonderful structure that he has in his possession; that he works with the community and all those involved to find a realistic solution that will save one of Las Vegas’ greatest historical buildings.