Last Monday, our client and friend Joe Schoenemann reported in the Las Vegas Sun that a national lobbiest for Historic Preservation, Heather MacIntosh was going to spend a few days in Las Vegas to try to figure out if there really is anything to preserve in Las Vegas.

A sense of history, a connection to the past, is something you don’t find easily in Las Vegas, most of which looks like it was built two weeks ago.

But people here want it. The recent furor over the potential destruction of the 64-year-old Huntridge Theater and the formation of the Atomic Age Alliance, a group dedicated to preservation, are two examples of the growing need in this metropolis for more than strip malls, cookie-cutter homes and casinos.

Try, however, explaining that undercurrent of need to someone who doesn’t live here. It’s not easy.

Which is part of the reason Heather Macintosh is visiting Las Vegas from Washington, D.C., next week. Since 2004, Macintosh has been president of Preservation Action (preservationaction.org, with the motto “Grassroots Preservation in our Nation’s Capitol”), a 34-year-old group that reminds Congress that maintaining the country’s history is as important as adding new chapters to it.

Macintosh laughingly said she knows little about Las Vegas, which is a big part of the reason she is visiting. 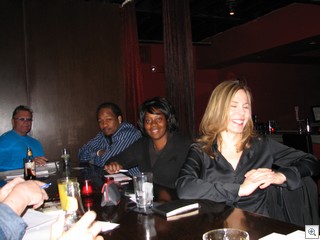 Ms. McIntosh began her journey with cocktails with most of the movers and shakers of the historic preservation community of Las Vegas. Attending the coctail reception for her was Brian Paco Alvarez of the Las Vegas New Bureau, Richard Hooker from the cities Cultural Affairs Department, DeDee Nave, Josh Geidel of Save The Huntridge, MaryMargaret from AAA, Pam Hartley, our own neighborhood activism coodinator, and Judy Gabadon representing Classic Las Vegas.

During her trip, Ms. MacIntosh also met with Senator Harry Reid and Mayor Oscar Goodman; toured the Morrelli House with DeDee Nave of the Junior League; several events with Courtney Mooney from the city’s historic preservation office; had lunch with Dr. Lonnie Hammargren, and dinner with MaryMargaret Stratton from the Atomic Age Alliance. 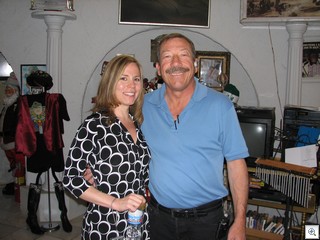 I’d like to think that the tour I gave her after picking her up at Dr. Lonnie’s Museum Of Nevada History was the highlight of her tour. We took a drive thru Paradise Crest, and Paradise Palms where we saw the fabulously restored “Caddy Shack” mid century modern home of Mary Margaret. The downtown neighborhoods of Marycrest, Crestview Estates, Marie Elana, and John S. Park gave Heather a real sense of the differing eras of historic neighborhoods.

On the west side, we drove Scotch 80’s, McNeil, and the Rancho/Alta Historic Neighborhoods.

As I was the last to meet with her during her whirlwind fact finding mission in Las Vegas, I’m happy to report that “Las Vegas IS NOT a lost cause”. Now she understands that Las Vegas is different than any other city since our “history” is so recent compared to other cities. But she quickly pointed out that that doesn’t make our cause “any less important”.

Heather told me she was thrilled to see so many different groups, organizations and business working together. In that regard we’re way ahead of most cities, where turf wars and ego battles get in the way of actually accomplishing anything.

The Mission Of Preservation Action

The Vision Of Preservation Action

Preservation Action will consider itself successful when historic preservation is deeply ingrained in our culture, embraced by the nation’s citizenry and its elected officials, from town hall to Capitol Hill.  In our vision, every American has recognized the need to become a steward of our historic and cultural resources.In our vision, our communities are stronger, more livable and exhibit a greater sense of place because these officials, supported and encouraged by the citizenry, have assumed a leadership role in initiating legislation that includes historic preservation as an integral part in creating and sustaining our communities.Since 1974, Preservation Action has been and continues to be the preeminent Capitol Hill advocate for national legislation favorable to historic preservation; however, it’s focus has moved from the need to formulate preservation policy and programs to one of supporting those initiated by our legislators.