Cultured To The MAX! Urban Living At It’s Finest.

Wow. I would have told you all to go.. but i didn’t know what to say!  I was going to this intimate theatre experience because some friends were involved.  Seemed like everyone there(the house was packed anyway & you would have had to stand!) was either involved in some amazing production or tightly connected to those who were.  The group putting on this insane show at the Aruba Hotel is called Dream City, produced by Marco Landin.. keep an eye out for anything they’re involved with!

The intimate venue holds about 120 (we had overflow) and the energy & creative culture was spilling out the front door. How could it not? With performances by people involved w/ Cirque, Stomp, & everything tourists go pay a bunch to see(tickets to this:$10, Culture:priceless); this event was a smaller, more intimate production…but with no lack on huge equipment, lighting & video jockey stuff, live jazz-fusion and rock bands, magic, performance art, flamenco dancing, um.. you name it.

Here are a few pics: 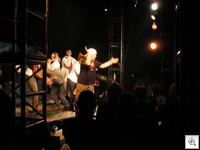 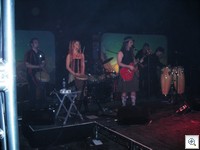 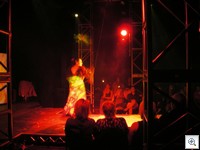 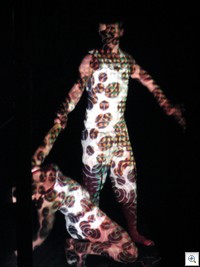 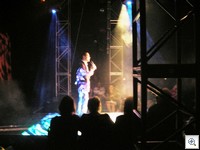 The production is titled 10 Min Max, and from what I hear the next show will be in September; though I’d prefer next month.  It’s hard to do it justice, especially since I was so blown away I forgot to take pictures until half way through the show.  This is exactly the sort of cultural/entertainment mecca that only seems to reside downtown & that we need much more of *cough Huntridge?*.