Antique radios on display at the Funk House Antiques.

I have the blue one in the top left in my own collection of radios.

We keep running into “Freddie Mercury”. A few weeks ago we saw him doing his act karaoke style at Dino’s on a Saturday Night.

He’s rehearsing a lot, and looking for a permanent gig in one of the impersonator shows on the strip 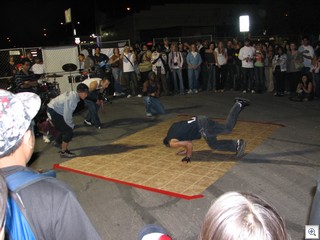 Mid Century Modern Homes In Las Vegas Are Often Used As A Backdrop In Movies, Commercials, and Art 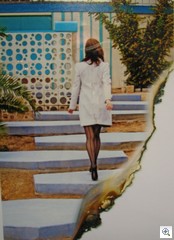 I mostly paid attention to the people this time, instead of the art, but I was drawn to this  photograph by Bryan Hainer.

I sold the current owner this mid century modern home on Dakota Way in Paradise Palms a few years ago, and was happy to see it being used as the setting for this photogragh.

I thought the model was MaryMargaret Stratton, at first, but Brian assures me it isn’t. The Mid Century Modern backdrop is complete with the “Stone Screen” decorative block, in one of my favorite patterns– the champaign bubbles.