First up on Historic Preservation Day For Las Vegas was “Re-Invention”. Our very own cultural historian, and occasional guest blogger Brian Paco Alvarez curated a photographic exhibit of Downtown Las Vegas then and now. You can see it till May 30 at Las Vegas City Hall, 400 East Stewart Ave. 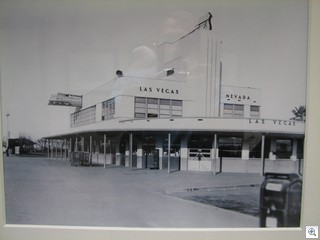 The News Bureau is a collection of over a million photographs taken since 1947 to promote tourism in Las Vegas.

Pictures of pictures never do justice, so you should make it a point to head downtown during business hours to see the exhibit.

The old train station at the foot of Fremont Street is a good example. I’ve always been told it was there, but this is the first picture I’ve ever seen of it. It was a streamline moderne building that was replaced by the Union Plaza hotel.

We got word that the owner of the Huntridge Theatre was not going to unlock the building for us shortly before the  hourly tours of the tours were to begin on Saturday. The volunteers decided to keep with our plans, by passing out literature, promoting the various organizations and  collected names of the people who came to see it.

Since we had nothing better to do, we performed a little community service, and pulled the weeds, cleaned the parking lot, and hauled away about 10 big trash bags full of litter. Thanks to the volunteers and a really big thanks to the 40 or so people who came over to see the building and left disappointed.

Hourly tours gave hundreds of Las Vegans the opportunity to see some of the rescued signage of Las Vegas History. The Conch Shell is finally put back together. It’s windows and interior will be finished shortly, and the museum will finally have it’s much needed visitors center.

VegasJudy, one of the regular volunteers for all things preservationist, sent us this YouTube video that will give you a great idea of the treasures that have been saved, and that await restoration. 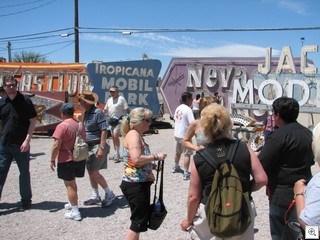 Cultural Fair At The Springs Preserve

I personally was committed to other events and missed the fun at the Springs Preserve. I’ll defer the description to our favorite Las Vegas Historian Lynn Zook at Classic Las Vegas.

She wrote it up on her amazing blog about Las Vegas History:

At the Springs Preserve, the Paiute Indians were performing their Pow-Wow Dance and it was great.  Indoors (thank the Lord) were all the museums and historic preservation groups.  We had a great time passing out information, spreading the word about how important it is to become involved in helping to save our history and answering questions.

The Film Festival’s afternoon screenings included a History of Helldorado (a collaborative film by the Nevada State Museum and FCLV) that included some great shots of Helldorado parades from the 1950s (including the Sambo’s that used to be on the corner of Bonanza and Las Vegas Blvd. North).

Dennis McBride showed home movies from the Abe Weinstein collection.  Weinstein owned a 16mm movie camera back in the 1950s and in addition to shooting the usual home movies of his family, he shot some great color footage of the iconic neon signs of the Las Vegas Strip at night, wonderful shots of the original Flamingo and Tropicana Hotels and more Helldorado Parades.

Historian Bob Stoldal showed two short films. “Is Anybody Listening” was a series that KLAS did 25 years ago on the preservation issues of the day back then.  A young George Knapp was the reporter on some of them.  Great footage of the old Ice House, the old Las Vegas Hospital and Kiel Ranch before all were lost to fires of a suspicious nature.

His second film was a series of ads and commercials from the way Las Vegas was advertised in the 1950s from his private collection.

The annual Helldorado parade thru downtown Las Vegas will get coverage after I get some sleep.