We’ve covered a lot of ground in our series. No one caught the mistake of a pattern that got repeated twice. I’m not going to re-number them, since no one else noticed.

There’s only a few left that we haven’t covered, and then there’s some bonus posts coming with some terrific designs done with just regular old concrete block. I might even go into the “mismatch” folder just to stretch out the series for as long as possible.

Today’s is pattern #47 of the Mid Century Modern Sunscreen and Decorative Block Wall Series. I’ve only found this on the top of one wall in Francisco Park. The pictures aren’t real good, as it’s not a well maintained wall.

I took pictures twice of this pattern, and screwed up both times.

This shot was taken facing west, right at sunset, and I should have used a fill flash. 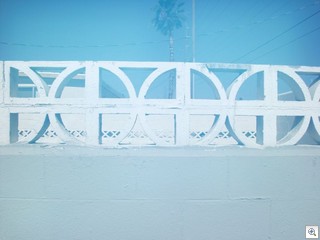 This time, I had the little wheel on the camera set to something besides “auto” and ended up with ugly blueish tint.

Either way, it makes some nice circles and crosses when you put the blocks together.