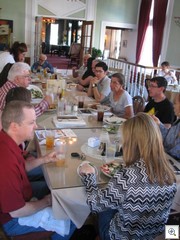 This last Saturday, a wide variety of people from many of the non-profits, government agencies and business that are devoted to preservation gathered at the first “Historic Preservation Summit” for Clark County.

We met in beautiful Boulder City, at the historic landmark called the “Boulder Dam Hotel”. I spent an hour before the meeting to do some driving and take some pictures which I’ll share with you tomorrow. Boulder City is definitely a part of Vintage Vegas, though it’s 25 miles and over the hill from downtown Las Vegas.

Lunch was casual, with lots of conversation about what different groups were doing. We clued everyone into the new plan to save the Huntridge, heard about Paco’s upcoming exhibition “Beneath The Neon” at the CAC which depicts the hidden life in the storm drains under the strip, as well as a lot of personal gossip. 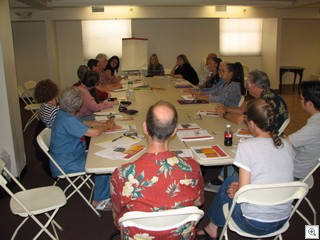 The meeting itself was called because our new best friend, Heather MacIntosh, who’s a lobbyist from Preservation Action. They’re a national non profit who not only lobbies politicians, they train and help grassroots preservationists to network with each other. Heather is particularly interested in the western states, because the entire preservation movement in the west is still in its infancy.

Mostly the meeting was a “group think” of how the various groups who were present can work together to create a bigger overall impact as well as to further the goals of each particular group. We decided that for Summit 2, we’ll want to include all the vintage neighborhood associations, the dozen museums in Clark County that weren’t in attendance, and as many elected officials as we can muster.

It was decided that an alliance should be formed so that all the various governments, clubs, organizations, associations and businesses can have a way to help each other and learn from each other.

In Attendance were Ellen Leigh from the  Atomic Testing Museum and Dennis McBride from the  Nevada State Museum. MaryMargaret and Carey Stratton represented the  Atomic Age Alliance , who along with Pam Hartley, MaryJoy Alderman and myself from Very Vintage Vegas were there expressing our concerns for the neighborhoods and mid century modern Architecture. Bob Stoddal, Courtney Mooney, and Jim Veltman represented the City of Las Vegas Historic Preservation Commission. Lynn Zook from Classic Las Vegas  spoke about preserving the oral history. Brian Paco Alvarez represented the Arts as well as Save The Huntridge. Joel Rosales from LeavingLV photograghs and records the loss and demolition of the buildings we can’t save. Trish Geran writes and documents the historic west side of Las Vegas

Missing from the meeting was anyone from Clark County, Henderson, North Las Vegas, Boulder City as well as all the neighborhood associations. We’ll announce Summit 2 in about a month once the location and date are picked.

IF YOU’D LIKE TO BECOME A PART OF ALL OF THIS…..

It’s real easy to get involved. Join a group. Become a museum docent. Start up or become a volunteer with an organization or a neighborhood association. Volunteer for SOMETHING that matters to you. We can use all the help we can get, and there’s an enormous opportunity for you to meet a lot of truly great people.

The other thing you can stop doing is telling anyone that there’s no history or culture in Las Vegas.