Some More “URBAN LIVING” for you. No, it’s not just for the tourists. 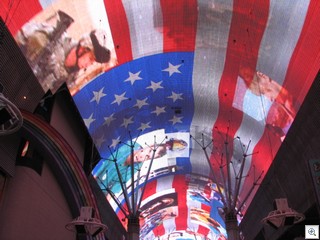 WHAT:
Fremont Street Experience will premiere “Don McLean’s American Pie” Viva Vision light and sound show with a weekend-long 4th of July celebration. The events are free to the public and include an opening ceremony on Thursday, July 3 hosted by Nellis Air Force Base’s Honor Guard and National Anthem performers.

Live bands will also be a part of the three-day entertainment line-up performing on both the 1st and 3rd Street stages July 3-5. Downtown Las Vegas hotel-casinos Binion’s, Fitzgeralds, Four Queens, Fremont, Golden Gate, Golden Nugget and Vegas Club will be selling 4th of July barbeque favorites from 4 p.m. to 9 p.m. Thursday-Saturday in addition to bar stations offering a variety of sodas, beers, cocktails and specialty drinks. 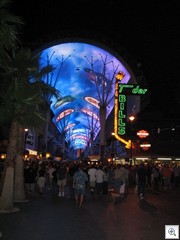 WHEN:
Thursday, July 3
8:45 p.m.
Opening ceremony with Nellis Air Force Base Honor Guard and a live performance of the National Anthem.

These photos were from the “tribute to Queen” light and sound show that I caught the night of the Helldorado Parade. Don McLean’s American Pie should be quite the show also.