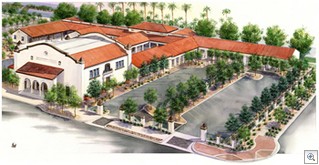 A piece of Las Vegas history will return to life when the city of Las Vegas Redevelopment Agency reopens the doors to the newly rehabilitated, community-oriented Historic Fifth Street School on Sept. 22, 2008. The Ceremony is at 5:30 pm. Alumni of the school are invited to arrive at 4:30pm for photos, and to stay for the 5:30 dedication.

More than $13.4 million in funding for this building’s transformation was provided by the Redevelopment Agency.

Billed as a “cultural oasis” in the midst of downtown Las Vegas’ office and legal corridors, the revitalized building will be home to an assortment of local arts and architectural organizations. The primary tenants are the University of Nevada Las Vegas Fine Arts Program, including the Downtown Design Center for the School of Architecture; the Nevada School of the Arts (a music education organization); the American Institute of Architects; and the city of Las Vegas Cultural Affairs Division.

Many of the common areas of the Historic Fifth Street School will be available for public or private functions. These areas include a multi-purpose performance area/auditorium capable of accommodating up to 400 people, a gallery space for exhibitions and smaller meetings able to hold up to 200 people and a 30-person conference room. In addition, there will also be open courtyards available for outside activities, as well as the 16,000-square-foot Centennial Plaza that can be used for outdoor gatherings.

Below the fold is a brief history of the 5th Street School if you’d like to know more.

If you’d like to register as an alumni, or find out more…

A Short History
If the walls of the Historic Fifth Street School could talk, they’d speak of dusty Depression-era days during 1936 when a much-needed grammar school opened to serve a bustling Las Vegas population of approximately 12,000.

It wasn’t until the late 1920s and early 1930s, when construction of the federally-funded Hoover Dam took place that the need for a much larger school developed. Hoover Dam construction, as well as the reduced residency requirements for divorces, and the legalization of gambling – both occurring in 1931 – had a huge impact on Las Vegas’ economic growth during this time. These developments helped Las Vegas avoid many of the economic problems associated with the Great Depression and created a population boom for the city — thus the need for a new school.

The school was built for $230,000 ($85,000 in federal funds were funneled through New Deal agencies; the balance came from the sale of school bonds.)

Officially called the Las Vegas Grammar School, the complex has informally been referred to as the Fifth Street School almost since its inception, due to its location on Fifth Street (renamed Las Vegas Boulevard in 1959) in downtown Las Vegas.

The complex functioned as a school, each year serving between 150 to 200 students in grades first through eighth, until 1966. It sat empty until 1970, when it was converted into Clark County offices. It was acquired by the city of Las Vegas from the county in 1996.

The Las Vegas City Council saw great potential for this historic landmark in the heart of downtown and showed their commitment to the project by transferring title of the school to the Redevelopment Agency on Aug. 4, 2004. This crucial move allowed for the use of much-needed redevelopment funds for the rehabilitation of the historic building.

Built in an era before air-conditioning, construction of the school incorporated many design features that helped cool it under the intense desert sun, including heat-resisting overhangs, 10-inch thick concrete walls, north- and east-facing windows and cooling breezeways.

Open and semi-enclosed courtyards add to the ambiance of the Spanish Mission-style architecture at the Historic Fifth Street School. This architectural style experienced a resurgence of popularity from the 1910s through the mid-1930s.

Preserved were the green and blue mosaic tile patterns and decorative fountain in the building’s center courtyard. Approximately 85 percent of these tiles are original, with the balance replaced by replicated tiles.

More than 141 doors and windows also were carefully recreated; only 30 of the original structures could be salvaged at the historic school.

The entire complex has been returned to what historic research has determined were the original colors. Slicing through layers of paint, a historic consultant painstakingly took samples of concrete and wood, and then performed microscopic analysis to determine what the original colors were for all of the building’s surfaces.

Now officially called the Historic Fifth Street School, the building and its site are listed in the National Register of Historic Places and the city of Las Vegas Historic Property Register.

Special thanks to Dennis McBride, curator of history and collections for the Nevada State Museum, who assisted with historic research for this article.

This entire article is from the City of Las Vegas Website