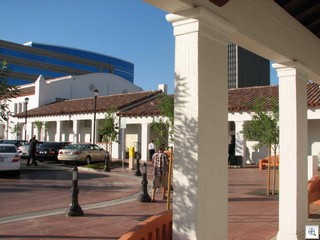 A standing room only crowd gathered last night for the formal dedication ceremony of the 5th Street School in Downtown Las Vegas.

Now you’ve got another great reason to visit downtown Las Vegas. It’s situated next to and blends harmoniously with Centennial Park. The restoration is stunning with the the exposed beam ceilings, Arches, carefully re-created doors and hardware. All the drop ceilings were removed and most rooms are now at their original 12 foot ceiling heights. 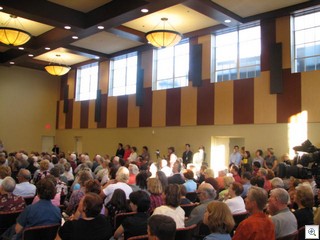 The ceremoney took place in the auditorium, which comfortably held the crowd of about 600. 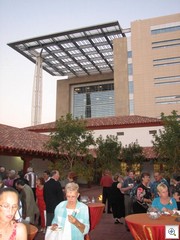 Situated in the shadows of some of the newest downtown skyscrapers, it’s provides a true homage to our past. About 300 alumni were there to help celebrate the historic preservation of the 1936 elementary school. At the time, it was the only elementary in Las Vegas. Lynn Zook, our favorite historian from Classic Las Vegas was in Kindergarten there just as the school closed in the mid 60’s. That made here one of the youngest of the alumni. It was the largest gathering of white hair that I’ve ever experienced outside of a bingo hall. 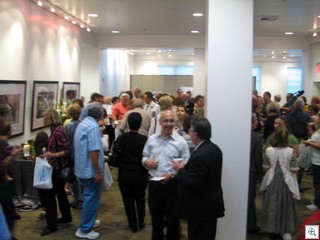 Brian Paco Alvarez curated the photo gallery, with photos from the UNLV Special Collections. Mary Joy Alderman, found a picture of her mother from around 1929 in one of the group photos.

Another 300 or so citizens showed up also to tour the building, listen to the Las Vegas Philharmonic, and the students from the Nevada School of the Arts String Ensemble.

Dr. Doug Selby and I joked afterward that it’s amazing that it came out so well when the City is forced by State Law to use the lowest bidder.

In the crowd were lots of faces that have played a role in the efforts to revitalize downtown. We ran into Bob Bellis, Dennis McBride, Michael Cornwaite, Odette, Courtney Mooney, as well as elected officials Gary Reese, Mayor Goodman and Thalia Dondero. Metro Captain Juick of Downtown Area Command. Naturally, the whole VeryVintageVegas gang was there, including Pam Hartley, Mary Joy Alderman, Susan Dean, and Joel Morales.  Many in the audience were from UNLV and I got to meet Robert Dorgan, one of the design professors who will be teaching at UNLV’s Downtown Design Center which is now located in the 5th Street School. We chatted a few minutes about urbanism and the need create livable and affordable urban clusters in downtown. I promised him a tour of the historic neighborhoods.

The local chapter of the American Institute of Architecture also have offices in the 5th Street School. Curt Carlson told me he’ll be the Nevada State AIA President this year.

The Mayor, City Council and the Redevelopment Agency are to be commended and congratulated on this tremendous accomplishment.