Samuel Beckett Festival Is In Full Swing Thru November 15 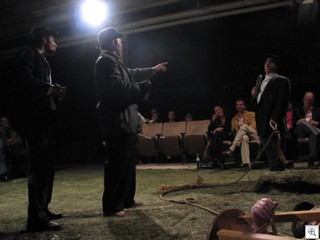 We attended last night’s performance of “Waiting For Godot”. It’s one of several plays being put on during the month-long Samuel Beckett Festival.

“Theatre of the Absurd” is just as strange as it was when I was in college. I read the play then, but had never seen it performed. I certainly understood the multitude of points better as an adult than I did as a 19 year old. This morning I spent a few minutes reading the Wiki on it, which helped me figure out some of what I was puzzled about. Even writing a few sentences about it has left me thankful that I don’t make a living as an art or theatre critic.

All of the 6 plays are rotating thru the festival, and there’s still plenty of time to see them all.  If all of the productions this year are as cleverly staged and well acted as what we saw last night, then the whole festival will be a huge success.

If you’re looking for something truly different in the downtown Las Vegas Arts District, then attend one or more of their performances. The whole schedule can be found at the festival’s website

The Holiday Windows Of The Arts District