One of our favorite mid century modern office buildings was the original Sahara Rancho Office Park. It’s wrapped in plastic now as part of the abatement process for asbestos and other hazardous materials. It’s the final step that happens shortly before  demolition.

This is the building along I-15 in the north west corner of the I-15 and Sahara interchange. There’s newer office buildings surrounding it, so this one stayed pretty obscure, but it was terrific. I’ve been trying to find an exterior photo to no avail, but Alan Sandquist has other interior photos on his flickr site. 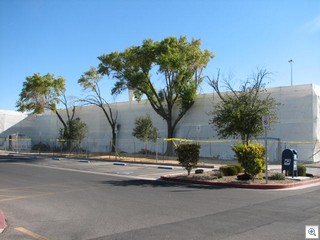 If anyone has some exterior photos, please email them to me. 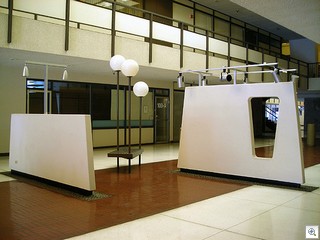 One of the steps that should have or could have happened was a vibrant energetic historic preservation community making a stink about it. There’s plenty of other buildings around Vintage Vegas that don’t have to suffer the same fate. We’ll be showcasing some of the famous mid century modern buildings that aren’t officially endangered yet, but someday someone is going to want to demolish them. I want us all to be ready for that day. 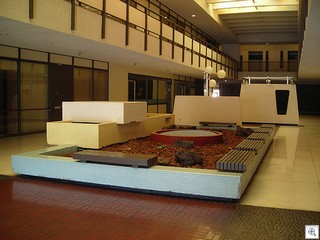 Another interesting thought is that if we can’t save the buildings, what about the light fixtures and the railings and the stonework and other elements that could be preserved and re-cyled into other buildings or homes.

There should be a law requiring that the archictural and design elements be saved before a building is demolished. Especially that iple globe lamp which would look great in anyone’s front yard.