The most important thing that I saw at First Friday last week is still showing thru the end of the month in the upstairs gallery of the Arts Factory.

Klever is a Russian Artist who painted the story of the Soviet attempt to destroy the arts in all of it’s forms. I think they paintings need to be seen in person, but they’re also on line at his website.

The paintings were all created in secret as he risked certain death if he was discovered. He managed to smuggle all of them out of Russia in 1986 and has been showing them around the world ever since.

Please at least look at the website, but head down to the Arts Factory and see them in person!

I took the liberty of re-typing below the description of one of the paintings that I found to be the most moving. 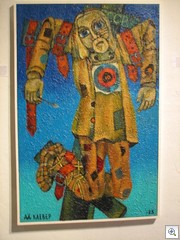 This is the artist, hanging on a cross which sybolizes the death of creativity, free will and art in general. The artist is still clutching onto the most powerful tool he will ever have – His paintbrush– In hopes that one day he’ll be able to use it again. Across his chest is a bull’s-ey. All non-conformists were rime targets for the KGB. This painting is a prime indicator of th fear all artists lived with. Only two years after this piece was painted, artists from Snkt Petersburg and Moscow participated in what is now called the “Bulldozer Exhhibit”, where all of the artist’s dispays were buldozed down into rubble. The destruction took place at Ismaelsky park in Moscow in 1975 and during peaceful dispay of work the KGB rolled across the park in bulldozers, destroying all of the work and hurting hundreds.