I’m really just starting to get back out to look at homes. I did write a few offers during the last 2 weeks, but we got out bid on EVERY SINGLE ONE. Almost every new listing (under 100k) that pops up is in multiple offer status within 2 days. The market comments below are about Vegas as a whole, which is good news.

In the historic neighborhoods, the numbers are even more dramatic. For example, the “downtown east side” neighborhoods from Sahara to Charleston and from the strip going east to Eastern have a 50/50 ratio of pendings to available. There’s as many in contract as there is for sale. That area has 4300 homes in it, and there’s currently only 61 for sale. Based on the phone calls I’ve made for the buyer I’m working with this afternoon, 1/2 of those that are still showing as available have multiple offers on them. Recent closing are showing that the homes are selling for MORE than the list prices. Those closing become the comps for the next set of listings, so I see prices starting to rise again.

It’s actually a tough tight market within the boundaries of Vintage Vegas. It’s still an evolving game with no rules, but a game well worth playing. Those who do buy now will do really well as things improve.

Current owners will be happy to know all of this well, as it portends a rapid return to the baseline of value that we had in 2004 before the 5 year insanity of the boom and bust cycle.

From Applied Analysis with thanks to Fidelity National Title: 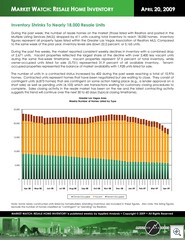 During the past week, the number of resale homes on the market dropped by 411 units causing total inventory to drop to 18,050 homes.  Inventory figures represent all property types listed within the Greater Las Vegas Association of Realtors MLS. Compared to the same week of the prior year, inventory levels are down 22.2 percent, or 5,165 units. During the past five weeks, the market reported consistent weekly declines in inventory with a combined drop of 2,671 units. 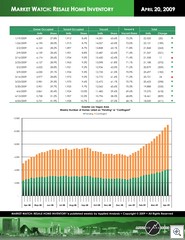 The number of units in a contracted status increased by 402 during the past week reaching a total of 10,976 homes.  Contracted units represent homes that have been negotiated but are waiting to close.  They consist of contingent units (6,873 homes) that are contingent on some action taking place (e.g., a lender approval on a short sale) as well as pending units (4,103) which are transactions waiting for customary closing procedures to complete.

Sales closing activity in the resale market has been on the rise and the latest contracting activity suggests this trend will continue over the next 30 to 60 days (typical closing time frame). (Applied Analysis)