I ran into an awful lot of you this weekend at the woodstock tribute palooza. For the rest of you, here’s some pix and some videos.

The ENTIRE summer long extravaganza has been a smashing success, regardless of what criteria is used to measure it. I talked to (and danced with) hundreds of strangers during the course of the summer. We met locals and tourists and never ever got a negative review. Jeff Victor, the president of Fremont Street Experience told me the crowd numbers, gaming numbers, food/beverage numbers where beyond the best hopes. I often was told that they’d booked their room on the strip, and ended up going to FSE every single night of their visit.

And those of us in the “new urban core” of Las Vegas didn’t have to drive far to get there, (or to get home safely, for that matter).

VeryVintageVegas is really about Urban Life. It’s not coincidental that the LV history scene, the Mid Century Modern revival scene, the art scene, the music scene, the entertainment capital of the world scene, are converged and merged in the essentially the same place and the same time. It’s happening “downtown” and not in the suburbs. Recession or not….the momentum hasn’t slowed.

This video is most of the actual Woodstock tribute show on the VivaVision.

I’d mentioned the Fremont Street Dancers before. Saturday night, I played spectator and shot this video of the 1st performance. They had pushed the crowd back and opened up a clearing and were all ready to go. I turned on the camera a minute early, which allowed me to catch the “frat boys” pushing their way thru the crowd only to discover themselves smack in the middle of the circle. 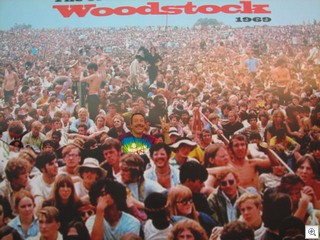 The dancers moved to the 3rd street stage area for the second performance, and I was flowing along with them when I realized they were dancing their way across the “take your picture in the crowd at woodstock” set-up.

You can get a good sense of the “set” in the video. There was a non stop line of people waiting to get into the crowd and have their friends take pictures.

Jeff told me that they worked on this all summer trying to get a picture blown up that big, get the dimensions and measurements right, and figure it all out. I’m glad they spent the time, as it ended up being one of the really popular attractions for the Woodstock Tribute Palooza. 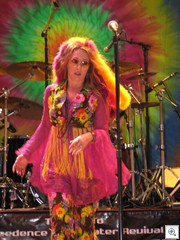 In the meanwhile, we had terrific tribute music on both stages. Janice, Jimmy, Creedence, and Jerry kept us dancing all night.