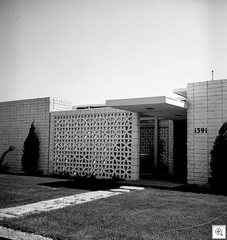 Anyone recognize this building? It would be a very cool Mid Century Modern home, but maybe it an office building? I don’t have any idea.

It’s one of the mystery pictures from February 1960. All of the pictures in this series are from a single roll of film that our anonymous historian dug up. Some are houses, but there’s also apartment buildings, commercial buildings, and a strip hotel. I’ll be sharing them all with you in the coming days, and perhaps you can help us identify the locations. The whole series will be categorized as “Mystery House Series”, in the left column.

The decorative concrete block sunscreen is a fairly common pattern that we’ve found in Las Vegas. The blocks are a staple of Mid Century Modern architecture. . This pattern was number 44 in the series that we ran of all the various patterns that I’ve ever found in Las Vegas. 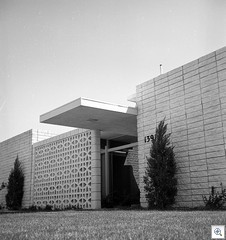 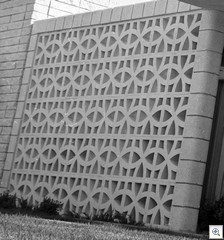