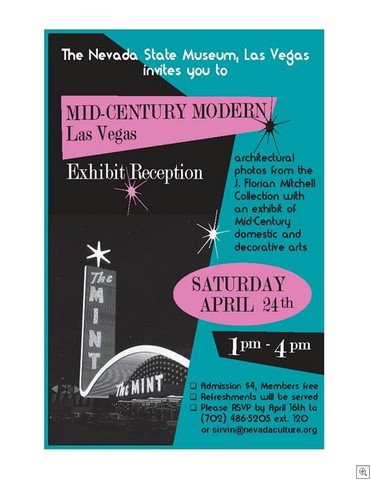 The opening reception for the new exhibit at the Nevada State Museum – “Mid Century Modern Las Vegas” will be on April 24th.

VeryVintageVegas readers are invited, and need to RSVP to [email protected]

J. Florian Mitchell was a photographer in Las Vegas during the 50’s and 60’s. When he passed away recently, his heirs found dozens of boxes of photos taken during the heyday of Mid Century Modern everything. The first few boxes were thrown away before they realized what they had.

The remaining boxes of the collection were donated to the Nevada State Museum, and my friends Lynn Zook and Dennis McBride have been going through the collection for over a year. There’s photos of just about every building in Las Vegas during that era. The best of the Mid Mod will be on display along with Mid Century Modern domestic and decorative arts.

Even if you can’t attend the reception, this is an exhibit that you won’t want to miss. I’m checking on the run dates for the “Mid Century Modern Las Vegas” exhibit and will update this post and do another when we have more information.