I’m starting a new series on the “historic” neighborhoods of Las Vegas. A few have Historic Status and get a capital H. But all of them are from the 40’s 50’s and 60’s. It’s my intention to do them as much in chronological order as possible, knowing that some of the neighborhoods developed simultaneously.

First up on the list is the historic Las Vegas neighborhood of Huntridge. In future posts I’ll discuss the area, the architecture, the charm and the history. Today though, we’re going to talk about the heart of Huntridge, The Huntridge Circle Park.

The Huntridge Circle Park sits in the middle of Maryland Parkway, just south of Charleston. It’s surrounded by 3 busy lanes of traffic in each direction. It’s also one of the smallest parks in the City of Las Vegas Parks System. 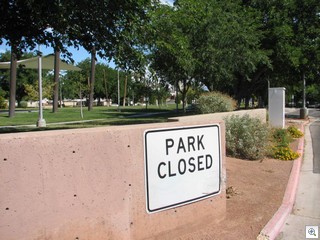 Unfortunately, the Park is CURRENTLY CLOSED. There’s lots of politics behind that decision. There’s plenty of coverage of it over at the Review J****nal. (aside: their name will never again darken the pages of my blog) but here’s a good story from 2006 in THE LAS VEGAS SUN on the politics. There’s lots of downtown neighbors who have very vocally expressed our desire to open it back up. The city says there’s no money to do it. There’s been plenty of meetings with councilman Gary Reese, plenty of letters sent, and plenty of whining from the neighbors.

Happily, it’s finally come down to this: A private group, the owner’s a gun store and shooting range called American Shooters has an idea to build a world class Veteran’s Memorial. They promised to raise the funds, select a design, and donate it to the city when done. So far, they haven’t let us down, and I don’t believe they will either. As you’ll see, the project has been moving forward for many months now.

There were numerous meetings held about this, and the leaders of many of the Neighborhood Associations prevailed at getting one of our own, Kasey Baker, to be on the committee to select. the final design from among more than 100 entrants. Kasey was the architect of the current iteration of the Park. I served on that committee for a long year 10 years ago as we rebuilt the Park and turned it into something beautiful and wonderful for the re-emerging Downtown Las Vegas Historic Neighborhoods. 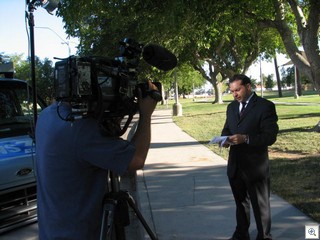 Last week, the 4 top finalists got to show off their concepts and designs. The maquettes or scale model mock-ups were on display for a day for the City Council and mayor and invited neighborhood activists to see them. I was on my way there to see them, when I saw Gerard Ramalho of Channel 3 filming his report live in the Huntridge Park, so I got to see this being filmed. They did an excellent job covering not only the past, but the present and future of the Huntridge Circle Park and the Veteran’s Memorial.

Here’s a few of the pictures I took that day to help you get the feel for them. (they’re clickable to see at a larger size). The “marqettes” will be on display for public comment and recommendation as to which of the designs will ultimately be built. Below the pictures is the schedule where you can GO SEE THEM FOR YOURSELF (PLEASE), and give the committee your input.

Input from ALL of Las Vegas, and especially from the Downtown Neighborhoods is honestly being sought. You can see the maquettes at the following 2 locations.

On display during store business hours