The Las Vegas Sun is reporting that the final selection has been made for the Veteran’s Memorial At Huntridge Circle Park on Maryland Parkway in Downtown Las Vegas.

A sculptor’s vision that shows soldiers from more modern times as well as soldiers from past conflicts is the winning concept for a Veteran’s Memorial that will be constructed in Las Vegas.

“It’s a salute to our country and to our veterans,” Bill Marion, a representative of the Las Vegas Memorial Foundation, told the Las Vegas City Council today, referring to the work of Artist Douwe (pronounced “Dow”) Blumberg.

The council was told there are no public funds being spent on the project. Although there is no definite timetable for when the project would be finished, Mayor Oscar Goodman said he would like to see it completed by Veteran’s Day 2011.

Read The Entire Story In The Sun 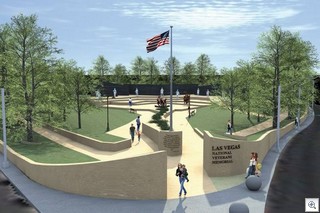 This STILL puts it at least a year till Huntridge Circle Park will be open for the use and enjoyment of Downtown Las Vegas residents, but at least we’ll finally get it open again.

Circle Park sits in an island on Maryland Parkway, just south of Charleston Blvd. It was donated to the city by silent film star Clara Bow. However, there is a deed restriction that it would revert back to her estate if it ever stopped being a park.

The Huntridge Neighborhood that surrounds Circle Park is one of the oldest, intact neighborhoods in Las Vegas. The homes were built between 1942 and 1944 during the first big population boom that was caused by the creation of the Army Air Station (now Nellis Air Force Base) during World War II.

All of the stories I’ve done about the Huntridge Neighborhood and Huntridge Circle Park can be found easily with this category link about Huntridge.