Behind the Scenes Tour Of The Lied Animal Shelter

As Iâ€™ve reported before, I was honored to be one of the 25 Las Vegas residents who were chosen to participate this year. Saturday was the first field trip outing to the Lied Animal Shelter.

Most of my preconcieved notions as to what we were going to see was based on some of the recent media reports. Once again, itâ€™s not always a good thing to believe everything thatâ€™s in the media.

Our tour guide was Terry Magnani, the Director of Community Outreach.

Sheâ€™s willing to give a tour to anyone who asks, and with advance notice, you can tag along on the same tour when itâ€™s frequently given to school groups, Boy Scouts, and any other organization.

Forthright answers were given to our many questions, and I felt that there was absolutely no effort to whitewash or sugarcoat any of the problems at the shelter, both prior current. All of the recommendations from the Humane Society are being implemented and followed. Mandated holding times are being adhered to. Disease Prevention if of the highest priority. 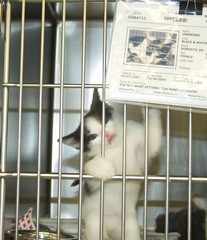 We were shocked at the numbers, and Terry explained that the 100 employees are all heartbroken that there are so many animals that come through the facility. 52000 a year! 1000 per week!Â  A couple of thousand get claimed by their owners. Only about 14000 of them get adopted out.

She tells us the rest are humanely put to sleep. I couldnâ€™t bring myself to finish the math.

As a dog lover, and because Iâ€™m out in the neighborhoods all the time, Iâ€™ve often witnessed many acts of stupidity, laziness, meanness, and insanity as to how people take care of their pets. We have a thousands and thousands of beautiful animals being put to sleep, when the truth is, most of them should never have been born in the first place. Currently, Liedâ€™s low cost spay/neuter clinic is on hold while they develop new programs and arrange for the money to help. Public awareness campaigns donâ€™t seem to make a dent in the unwantedÂ animal population. But they keep trying.

The biggest surprise that I got was the â€œenvironmentally soundâ€ green aspects of the entire campus. The adoption shelters, called Bungalows are solar powered. 86% of the massive amount of water used for cleaning is reclaimed and re-used. The bungalows are heated with radiant floor heat in the winter, and cooled with energy efficientÂ “COOLARADOS” and computer controlled venting systems. 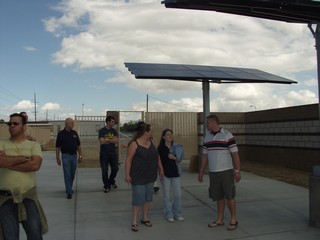 I quote from the Lied Websiteâ€™s green info webpageâ€

Architects for the expansion say they will follow guidelines established by the U.S. Green Building Council to try to achieve that agency’s Leadership in Energy and Environmental Design certification for environmental responsiveness and resource efficiency.

Windom Kimsey, architect for the project for Tate, Snyder & Kimsey, said ventilation windmills will push air through the kennel floor toward the roof, eliminating heat and odors. The shaded archways, he said, will be topped with solar panels that during winter will heat the kennel floors.

“The solar panels will provide 600 kilowatts for the 44 dog bungalows and 255 kennels,” he said, noting that much wattage can power about 20 households. Desert landscaping also will be utilized to save water, he said.

Bill Snyder, president of the architectural company that has operated locally for 40 years, said the design of the project kept in mind the hundreds of children who will visit the site to adopt animals.

“This will be a highly visible educational tool,” Snyder said. “It will be a showcase for what the environment and conservation are all about.”

Lied is the only totally open shelter. It handles all animals for Clark County, Las Vegas and North Las Vegas. Itâ€™s a 501C3 Non-Profit Corporation.

Ferrell Cats are a huge problem in the valley. They are almost always put down, due to disease and bad temperment.

Eventually, there will be extended-stay adoption center, veterinarian tech school and a dog show arena.