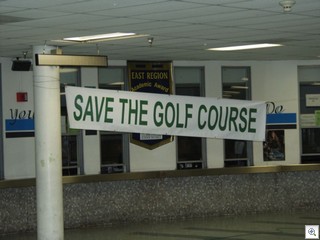 Well over 100 Paradise Palms residents and many others such as myself, who are concerned for keeping the Las Vegas National Golf Course as a golf course attended a meeting last night with the new owner. County Commissioner Chris Guinchigliani hosted the meeting, and still appears to be firmly on the side of the community.

John Knott, the new owner of the golf course told the crowd that HE TOO wants it to stay as a golf course, and the he intends to make it extremely profitable by marketing it to tourists. However, he was quick to point out that if that fails, then development of the land into housing tracts or whatever was not off the table.

Iâ€™d LIKE to believe him, but I remain skeptical. Below Iâ€™m reprinting the official response from Kate Bennett, who is one of the leaders of the neighborhood and community opposition.

The Official Response From The Neighborhood Opposition:

Couldn’t have said it better myself. Let this be an eye-opener. The proposals Mr. Knott put forth tonight simply do not add up. For all of the research we’ve done on this guy, all of his background, his connections, even his shady investor, there is nothing that indicates we should trust that his objective is to keep this a golf course. This is a man who doesn’t run golf courses – this is a man who makes millions and millions of dollars from extremely lucrative and big-business real estate deals.

And there will be a fight – whether or not we have the help of our Commissioner, and I know many of you are now wary of her determination, considering how drastically her tune has changed since she sat in our homes and promised us she would do everything she could to prevent this guy from coming in here, not on her watch – we have independently contacted legal counsel, experts in this field, advisors from the various boards and commissions that this plan will have to contend with, and we are prepared to fight tooth and nail to save our homes and property values.

At the end of the day, keep in mind that Mr. Knott bought this course to make a profit – this is what he does for a living. A fresh coat of paint and a new menu ain’t gonna cut it. Mark my words here tonight: You buy his rhetoric and you’re in for a rude awakening, whether it’s tomorrow or two years from tomorrow. If you think he is concerned about golf balls in your yard, seed dispersion or the fish in our ponds, well, then that’s up to you. We’re not telling you what you should think, we’re just asking that you take a look at the cold, hard facts (none of which, by the way, Mr. Knott would own up to tonight – notice he hemmed and hawed when asked for solid figures: how much profit is he looking to make before he makes his decision, how much time will he invest, can we get his word in writing, will he support attempts at a zone change, will he promise, in writing, that residents will have a say in any and all future development … none of this.) And I would like to add that even though Mr. Knott said tonight that there were no plans drawn up, that he had not spoken with developers or experts in planning, we cannot divulge how at this point, but we know this is not true. It would be naive to think that Mr. Knott, in his position with CB Richard Ellis, does not have a number of attorneys, consultants, etc., who would do these things on his behalf.

In the end, if you would like to benignly stand by, clean up your homes and yards, ask Mr. Knott what you can do to help him make the course more profitable (and thus save it??), that’s again solely your personal decision. We, however, intend to go in with our eyes open and our knowledge of Las Vegas development, politics and business firmly intact. Some of us have spent hours poring over details, CCNRs, County rules, loopholes, cases in other states, history, etc. It’s not as simple as Mr. Knott made it out to be tonight, people. Look at the numbers – the ONLY way Mr. Knott will make money on his investment is to either develop the course, or flip it to other developers. It’s not going to happen by making this the “funnest golf course in America.” You’re telling me some high-roller who’s willing to drop $300-400 on a round at Bali Hai is going to change his mind and come to National because the clubhouse has new chairs?? Come on. Let’s get real. And let’s get real before it’s too late.

Think his threats of “you better help me … or it’ll be your fault if this place is developed” scared me? I say, bring it, Mr. Knott. You have no idea what we have in our arsenal.