Joe Peffer writes a similar blog to VVV that’s about Very Vintage Columbus Ohio. Of course an old home in Columbus was built in the 10’s and 20’s or even earlier. 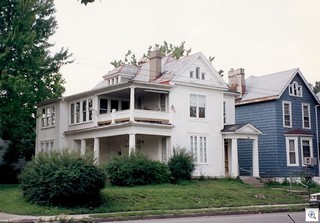 The first house JJ and I cut our teeth on as home restorers cost me a big chunk of my life savings and an even bigger chunk of my ego. It was built in 1894 and sits smack in the middle of what Joe calls “Old Town East” which is no further from downtown Columbus than Huntridge or McNeil is from Downtown Las Vegas.

Columbus was already a 100 year old city with well over a million people even when I was a kid way back in the 50’s. Vegas was only about 50,000 people then. I grew up in a neighborhood similar to McNeil, that was built in the late 50’s. But in Columbus, late 50’s neighborhoods were about as far from downtown as su**erlin (no swear words allowed) is from Downtown Las Vegas.

If you know about a neighborhood or downtown area in the city you’re from, I’d love to hear about it. Especially if it has had a rebirth similar to what Vintage Vegas is going through.

There’s a few more pictures of some other homes on the same street. If you want to see them… someone other than MJ has to tell me so in the comments.