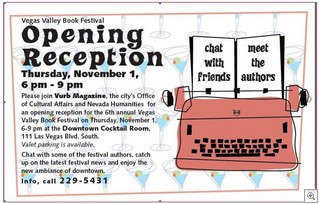 We invite you to join us at the Opening Reception this Thursday 10/1 6â€“9 PM at the Downtown Cocktail Room.

Hereâ€™s The original press release and information on the various events.

Sarah Vowell has published four bestselling books and is well known for her contributions on KNPRâ€™s This American Life.Vowellâ€™s book Assassination Vacation is hilarious and haunting road trip to tourist sites devoted to murders of past presidents. She is also the author of the essay collections The Partly Cloudy Patriot and Take the Cannoli, and Radio On, a diary of a year spent listening to American radio. The Boston Globe declares: â€œVowell is, at heart, a storyteller. Her gift is one of cosmic inclusion â€“ allowing the natural collision of intellect and personality, rigorous research generational quirks.â€

This year the festivalâ€™s theme of celebrating the written, spoken, and illustrated word will follow six program tracks; Contemporary Literature (fiction, humor, commentary, memoir), Literature of Las Vegas, Childrenâ€™s Literature â€“Target Childrenâ€™s Book Festival, Literature of Travel, The Literature of Place, and Poetry. Also, the festival will be expanding downtown by offering programming at several historic locations and various districts of the city.

This year, the festival has a number of new events, including a literacy project with Las Vegas Academy featuring a collaborative work by students on themes related to the old Las Vegas High School. There will also be two literary events that pilot the festival, the Las Vegas Literary tour and readings will visit famous and infamous literary sites in and around Las Vegas and EAT will showcase the literature of the Las Vegas table.

The festival concludes with Sarah Vowell speaking at the Las Vegas Academy at 7 p.m. followed by a closing reception at the Morelli house at 9 p.m.

This program is provided by Nevada Humanities and the Office of Cultural Affairs of the city of Las Vegas Office of Government and Community Affairs. For questions related to these events call 229-5431.