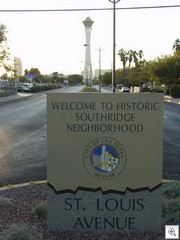 We want to thank the City of Las Vegas for our 2 latest historic neighborhood monument signs.

They’re the final finishing touches to the St. Louis Avenue Beautification project that we’ve reported on many times in the past. 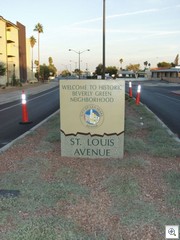 I founded the  Southridge Neighborhood Association in 2001 as a response to the Stratosphere’s plan to build a giant scorpion tail shaped roller coaster down the side of their tower and across Las Vegas Boulevard right to the edge of my neighborhood. Originally, Southridge’s boundaries were from Sahara to Oakey and LVBS to Maryland Parkway. In 2004, we split in half, and created the Beverly Green Neighborhood Association from 6th Street and west to the Strip.

Clark County has a similar department with a similar program if you don’t live in the city. Their phone number is 455–3777

From the article I linked to above, here’s a little piece of recent downtown history for you: 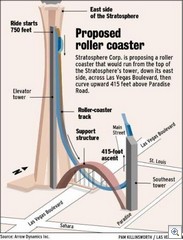