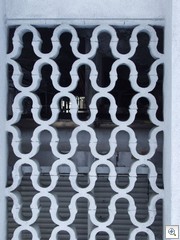 Who would have thought thatÂ  the power plant of Circus Circus would prove to be an interesting spot on the tour?

MaryMargaret showed us the block screens surrounding the building. She was kind enough to mention VVV and the various posts that weâ€™ve done in the past regarding Decorative Block Sun Screens,Â  and hereÂ Â and here that were ubiquitous of the architectural design in Mid Century Modernism.

Iâ€™ve collected pictures so far of 37 different designs, and keep threatening to create a post showing all of them at once. Iâ€™m threatening to do once again. Iâ€™ll eventually get around to it.

One of the interesting things that MM mentioned was that they were first created by a man named Block STONE! Thatâ€™s why theyâ€™re called â€œstone screensâ€. Iâ€™ve always called them decorative block, since I didnâ€™t know there was anyone to give credit to. (Thanks MM for setting the record straight in the comments)

Iâ€™ve only ever found one source on line for them, from a company out of Orlando Florida. A-1 Block Service

Lowes Depot only carries 2 very simple designs which I mentioned in one of the previous posts. I think thereâ€™s enough interest in Mid Mod now that some entrepreneurial soul could start a little backyard business designing new patterns and reproducing the old ones.