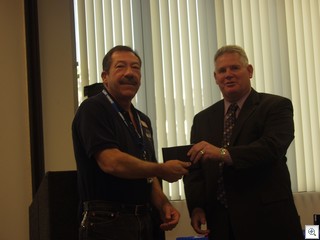 I was honored and privileged to be one of the 25 Las Vegas citizens to have been picked to be in this year’s Citizen Leadership Academy. The CLA is an intensive introduction to the behind the scenes workings of the City of Las Vegas.

It’s funny how we watch a massive thing like a city function around us and never give a thought as to what it does take to make it run. We all know the things we hate, and the things that bother or annoy us, but never give a single thought, never the less a second thought to all the parts of a government that don’t directly affect us or that we don’t take advantage of. And, I’m as guilty of anyone of taking for granted the things that are so right about Las Vegas.

If you never go to one of the parks, or participate in any of the sports or activities, you don’t realize that that there’s actually world class facilities being run by dedicated, excited and enthusiastic city employees.

Our streets get swept, and the pot holes get filled and the graffiti gets removed and the new homes and buildings get inspected, and the state and federal governments get lobbied, and new business gets enticed to move here.

The water flows from the tap, the sewage gets cleaned, the trash gets picked up, the tv station provides access to the public. The Arts get encouraged and presented. The city and county websites make it easy for the public to find their way to the services that they’re looking for.

And all of that happens around the clock. It happens with thousands of employees who don’t run for office, don’t get seen on tv, and don’t get the recognition they deserve. We didn’t meet with or hear any speeches from the elected officials. I’m grateful for that. I’m sure that if that was all we were presented, that it would have been gratuitous and bogus.

During the various CLA classes that we attended, we only met with the city’s employees. They were organized, enthusiastic, and devoted to providing the services to the public. They’re dedicated to making Las Vegas a world class city. They’re empowered to get the citizenry involved. They too have children and parents and family who deserve to live in a great city.

And most important of all, they didn’t try to hide the problems. We discussed the good and the bad. Nothing was being swept under the rug. Every Department that made us presentations showed us their successes as well as their failures. They pointed out what they’re doing right, and what they need to improve upon. 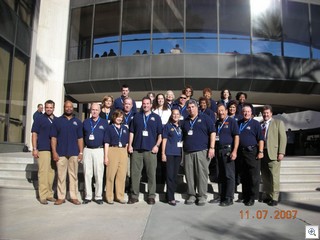 One of the most striking things about the 25 members of this years class was the diversity of who was picked. This speaks well of the 62 who applied, and to the selection process itself. Ages ranged from the mid 20’s to the mid 70’s. We had racial diversity, with whites, blacks and hispanics. We had lawyers and housewives and realtors, and retirees, and school teachers, and social service professionals. Most were married, most had children. Some were single, some were gay, some were disabled. And all of us were committed to making the world and the city a better place to live. Each of us plan to take what we learned back to our own micro world and do some small part to better the lives of those around us.

We met every Tuesday night for the last 2 months, as well as two Saturdays in between. Wednesday morning was the graduation ceremony in front of the the city council. AJ Powell, spoke to the council on our behalf.

Now there’s 3 members of the VeryVintageVegas team that have attended. Mary Joy Alderman was a member of this years class, and Pam Kowalski was a member of the first class in 2004. All of us are devoted to preserving the classic neighborhoods, educating the public about the housing and architectural styles of the 30’s, 40’s 50’s and 60’s, and to keeping alive the history of how Las Vegas came to be.