I spent about 3 hours yesterday at the H and M auction. Most of the time was spent with my jaw on the ground at how low the prices were on the final bids. The VAST majority of the properties were suburban, newer than 10 years old, and rarely  did anything over 2000 sf break the $100. per square foot barrier. 3000 foot 2 year old homes were selling at 275k or 295 etc. In general there were only about 3 or 4 initial bidders per house, and all but 2 usually dropped out quickly. 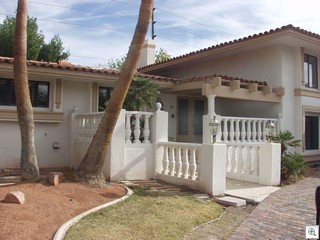 There were hardly any Vintage homes in the Auction yesterday, which proves the point I keep making that the “foreclosure problem is a suburban problem”. There are some Vintage Vegas homes in next weeks auction including this one in Rancho Bel Air. It’s at 229 Dalmation, and was most recently listed as a bank owned property for $614,900. The minimum opening bid for this 3600 sf home with pool is $269,000.

I took some pictures when I previewed it yesterday. It’s in pretty darn good condition overall, with some very nice features.

It’s not too late to jump into the auction game, and there’s certainly going to be more of them coming up in the next few months. We’ll always keep you posted when they get announced.

If you’re interested in this one, we’ll have to preview the homes with me personally, since all 3 open house opportunities have already passed. If you’d like to see this or any of the other properties for this weeks auction, just give me a call at 378–7055 or send me an email