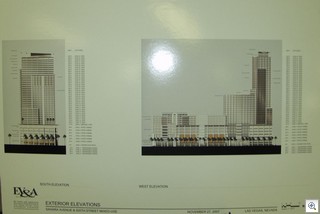 A new proposal was introduced last night to build a 44 story condo/office/retail mixed use tower at the corner of 6th Street and Sahara. Tony Romas, Marie Calendars and the small shopping center would be replaced if the plan ever goes forward.

The biggest objection is that the parcel and site plan would be in the back yard of homes on Alhambra Circle in Town and Country Estates, and right across the street from a dozen homes on 6th Street. The neighborhood Associations have always objected to commercial intrusion into the neighborhoods.

(As with all photos on VVV, you can click the picture to see it full sized)

The developers own most of the land already, and there’s no stopping them from redeveloping it, but the leaders of the neighborhoods that are most affected, Southridge and Beverly Green, gave the project mixed reviews. With out a doubt, everyone wants to see Sahara Avenue cleaned up and redeveloped, but everyone I spoke to objected strongly to the 44 story height of the tower. Opinions were also very strong that the preliminary drawing showed a building with no artistic merit, or even the least bit of homage to the 1950’s mid century buildings surrounding the site. 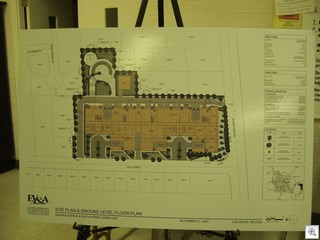 They claim the target market for the condos will be local working people, but the stated price range is from 300k’s to 1.2million. Granted new shops and offices with workers who will go out for lunch, shop on their lunch hour, and lots of residence will be good for the single family homes nearby. However, last night they didn’t discuss traffic problems that would be generated with all the traffic for the project having to use 6th street.

There will be more sit down meetings with the neighborhood associations, and they’ll need to get zoning variances, which we think will start with planning commission meetings in January.

In general, we think it’s much to big of a project for that corner, and that it’s out of character for the surrounding neighborhoods. We always believed that medium rise mixed use would be much better than a 44 story tower, and would have no problem with it if it was mid rise instead of hi rise. Of course, if the design incorporated a lot of mid century modern styling it would help appease us a lot.