My Earliest Memory Of “Jetson” Architecture 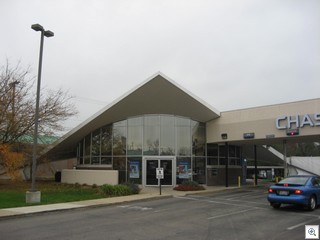 Goodness knows Iâ€™d never heard the term â€œmodernismâ€ when I was 5 years old. ButÂ even when I was 5 IÂ was crazy aboutÂ a bank building out in a Columbus suburb called Reynoldsburg, Ohio. It looked like a space ship. There was nothing else like it. It was across the street from the roller rink, and next door to city hall. Weâ€™d watch July 4 Fireworks from the parking lot.

I asked my brother Ken, who still lives in Columbus to go see if it was still there. He took some pictures, and except for the drive-thru ATM awning that was added sometime in the last 30 years, itâ€™s exactly as I remember it in 1960.

Of course now I know itâ€™s part of the vast collection of Americaâ€™s love affair withÂ modernist or â€œgoogieâ€ architecture fromÂ the 1950â€™s and 1960â€™s. The classic Las Vegas that we know and love is a result of it. One of our many goals in the next year is to save as much of it as possible. Weâ€™ve shown several examples in the past from here in Las Vegas. There was a pretty good discussion and demonstration during or Midnight Bus Tour Of Mid-Century Modern Las Vegas.

Fortunately, thereâ€™s a lot of other people interested in what we now call â€œmid-century modernismâ€. We belong to 2 local groups who share that mission. The Atomic Age Alliance celebrates all things â€œmodernâ€. Classic Las Vegas celebrates all things historic. I invite you to come out and play with us in the next year.