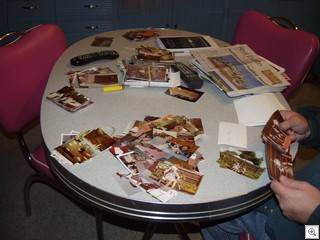 I’ve taken pictures my whole life. Lots of pictures. There’s 642 rolls of film that were developed, and shoved into a box in the hall closet. I started opening them and sorting them a few months ago. I got my first digital camera in 2000, and finally stopped adding to the collection of unopened envelopes.

The last time I put a picture into an album was 1984, just before the fire in the Livingston Ave. house in Columbus. If you’ll remember, last Ocober, I started the project in order to find pictures of the first house I re-habbed.

When my brother Kenny from Columbus came over last night, I showed him some of the stacks of photos that are kind of sorted. 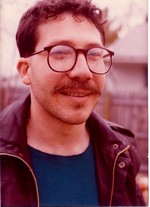 The most amusing part of it, is the pictures of me when I’d hand off the camera to someone else. Now I’m really feeling old. Amazing what 30 years and 20 pounds will do to you. But the mustache is forever! Actually, I didn’t remember that there were several periods along the way where I was clean shaven. Maybe I’ll share one of the pictures at another time.

On the other hand, last night’s venture into nostalgiaville gave me the opportunity to show you the hot pink 50’s chrome, vinyl and formica dinette set that graces the kitchen.