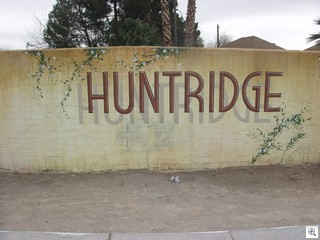 One of the goals this year, is to do posts on each and every one of the neighborhoods in Vintage Vegas.

As we do these new descriptive posts of each neighborhood, we’ll be pulling it out of the category list. You’ll be able find each of the individual neighborhoods when you scroll over the areas at the top of the left column.

For example, under “downtown east” you’ll find Huntridge, and by clicking on it will be able to sort the whole blog to just see posts about Huntridge.

Huntridge was one of the very first tract home subdivisions in all of America.

We usually think of tract housing as a 50’s thing, but he first of the 642 Huntridge homes were started in 1942 for the airmen stationed at the new Army Air Field which is now Nellis AFB. There were 4 basic configurations, ranging from 750 to 900 sf, but all of them were 2 bedroom, 1 bath with a carport under the high pitched roof line of the home.

You’ll find them on both sides of Maryland Parkway between Oakey and Charleston.

There’s very few originals left, now, as most of them at the least have had the carports converted to living space. A great number have had room additions of various sizes and quality. Some of the additions were extremely well done, like our new listing on Jessica. Some of them have been really butchered.

The neighborhood was designed to be a walking and bicycling neighborhood. The streets were narrow, Circle Park was smack in the middle of it, and shopping was as close as Charleston and Maryland Parkway (which ended at Oakey going south). Click on the picture and you’ll get a real kick out of the 1944 aerial view. Tax records show about 50 of the total homes were built after 1944, but I don’t know the story about those 50 properties.

60 some years later, there are no 2 alike. Some of the streets are very well kept and some of them are still waiting for new owners to restore the landscaping and re do the homes. I’ve taken pictures of many of them, and want to show you some of the various colors, textures, facings, and design changes that have happened to these cute homes over the years.

Currently, there are 16 homes for sale ranging from the ridiculously cheap but REALLY broken and abused one for 130,000,  all the way to the extravagantly remodeled 2800 foot one for 399,000. We have 2 listed on Jessica and Yucca, which are in great condition and at fair prices of 280k and 218k.

Here’s some of my favorites:

They’re all clickable to see expanded pictures, but it’s much more fun to take a drive or a walk and see for yourself.

There’s also several posts that I’ve on our old blog,so if you want to see more about Huntridge, here’s a link to our old blog and the posts that mentioned huntridge.

You can see all the posts about Huntridge, and start to learn the new navigation tricks for VVV by clicking on the “downtown east” link in the top left hand column. All the neighborhoods that have posts about them are listed there, and you can click on Huntridge to find all the Huntridge posts.