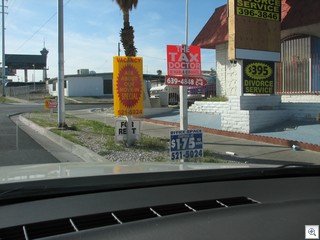 I spent an afternoon the other day with one of the cities officials. He’s as annoyed as I am about the abuses that we have to look at on all of our primary traffic corridors in Vintage Las Vegas. We took a drive, and documented the worst abuses.

When these properties were converted to professional or commercial use, there were restrictions placed on them. The owners were required to maintain landscape buffers. There were restrictions against “gaudy” signage. There’s alway a ban on those little signs they put on street poles and public right of ways. Even the politicians are guilty of it during election cycles.

It’s actually a problem all over the entire valley, but since I spend so much of my time within a mile or 2 of the strip, I’m particularly offended when I’m on Charleston, or Maryland, or Sahara, or Eastern or Paradise, or Desert Inn or Rancho, or Valley View. 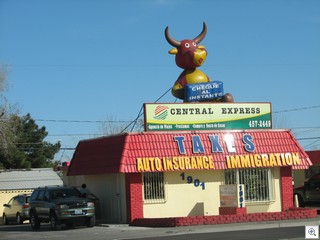 There is a mechanism in place in both the city and the county to deal with “street spam” and all the other code enforcement issues.

The problem, though, is that it’s a complaint driven system. If we don’t call to complain, the city and county won’t do anything about it. Therefore, I’m complaining, and I want you to do the same.

Neighborhood Services handle problems like this, as well as GRAFFITI, SHOPPING CARTS, OVERGROWN LAWNS, and so much more. The only difference between the county and the city is the phone number. If there’s something bothering you in the City Of Las Vegas, the number is 229–6615. If it’s in the COUNTY, (generally speaking south of Sahara) the phone number is 455–4191.

The best way right now for us to help stabilize home prices, (besides going out and buying a home, which isn’t a bad idea at all) is for us to make the neighborhoods and the surrounding shopping areas look better.

All complaints are made anonymously. I call in several times a day. If you pass by something that offends you, give neighborhood services a call.

The city has a great little brochure on what’s allowed and what’s not allowed. I believe the rules for the county are identical.