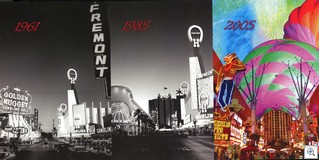 To kick – off the state-wide Preservation Week, Re-Invention focuses on the evolution or Re-Invention of downtown Las Vegas by comparing historic and current images of buildings such as Binion’s Hotel on Fremont Street and dramatic changes such as the re-location of the La Concha hotel lobby. Brian Alvarez, Curator of the Las Vegas News Bureau Photo & Film Archives will be there to talk about the photo collection. Additionally, Bob Stoldal, President of the Historic Preservation Commission, will kick off the weekend by talking about the Historic Preservation and Archaeological Awareness Month events scheduled. The historic images were provided courtesy of the Las Vegas News Bureau.

A public reception is scheduled for Friday, May 16, from 3 to 5 p.m. in the Bridge Gallery, on the second floor of Las Vegas City Hall, located at 400 Stewart Ave.

Visitors may reach the gallery through the second floor of the Las Vegas City Hall parking garage on the southeast corner of Stewart Avenue and Fourth Street. Parking is by paid meter only. Hours are Monday through Friday, 8 a.m. to 5 p.m., excluding holidays. There is no charge for admission. For more information about the Bridge Gallery call (702)-229-1012.

Over the years, the News Bureau has amassed one of the most comprehensive photographic and video collections showcasing the history of Las Vegas.  The archive includes superstar entertainers and sports figures, world-class concerts and special events, and the ever-evolving skyline.  Classic images include “Miss Atomic Bomb,” now a part of the Smithsonian Institution’s collection, and the classic “Floating Craps Game” shot at the Sands in 1953, as well as video of Elvis Presley, Liberace, the Rat Pack and other Las Vegas icons. LVCVA contact, Lisa Jacob, 892-7641