Yes, we have unique charming homes on bigger lots in Vintage Vegas. Yes, the commute times to the strip and downtown and UNLV and Airport jobs are extremely low. Yes, there’s history and folklore about the vintage neighborhoods.

But there’s something else. There’s knowing your neighbors. There’s a sense of being part of something bigger than any one house. There’s an ever growing art and music scene. There’s Mom and Pop stores and restaurants. There’s cultural diversity. 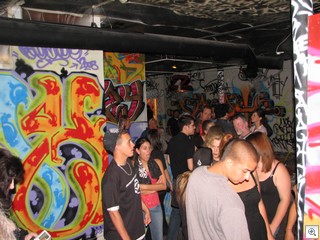 Last night, the crowds that attended the Dust Gallery Neighborhood Party and the new galleries of the west wing of the Arts Factory and the Grand Opening of “Beneath The Neon” certainly made the point. Hundreds of people came out. But they didn’t come from the suburbs (well, a few of them did), but they mostly came from the Vintage Vegas Neighborhoods. They ran into people they know. They got introduced to people they ought to know. They went home feeling good about the people as well as the art.

We have neighborhood meetings that people actually attend. There’s email thread lists for almost every neighborhood association. There’s many more readers of Very Vintage Vegas than even I know about. I met at least a dozen of you for the first time last night who introduced themselves. Someone that Mary Joy met told her “that the people who don’t live in Vintage Vegas don’t know what they’re missing”.

To be a part of all of that, you need to proactively decide that you want to participate. Join a club. Volunteer for an organization. Get involved with a block watch or neighborhood association. Go buy some art at First Friday. Go know on a few neighbors doors and say hello. Leave a comment occasionally on this blog. Eat a meal at one of the small restaurants and talk to the other patrons as well as the shop owners.

It’s a lot of fun living in Vintage Vegas if you’ll get out of your home. Lots of us are doing it. Then it won’t be just about your short commute, or your charming home, or your historic neighborhood. It’ll be about an urban lifestyle that’s full of fun, diversity, culture, and neighborliness.

Give it a try. We welcome you.