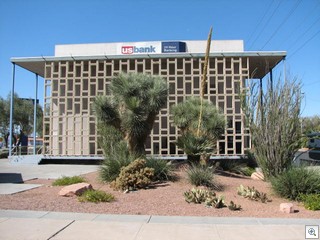 One of my favorite Mid Century Modern 60’s buildings has a massive sunscreen that should have been part of the decorative block series from last summer. This is the US Bank building on the corner of Charleston and 10th.

It also would qualify for the current series of pillars and posts and columns. On 3 sides of the bank, the overhanging roofline is supported by steel posts, but the east face of the building sports the impressive sunscreen.

There’s also a very nice cactus garden with some of the largest Joshua Trees in Vintage Vegas. 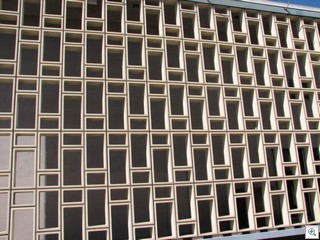 I actually walked up to it yesterday to see how it was made. I discovered that each vertical stripe is a separate casting of a concrete column.

That means that these aren’t stacked up at all, which is how they look. They’re each a column laid out side by side.

Everywhere we look in Vintage Vegas, there’s great design. It’s fun to look at and it’s inspiring. Yet all of it is endangered from the wrecking ball. There’s no immediate or imminent plans for this building.

The current economy has given us some breathing room, but this is exactly the kind of building that developers will be scrutinizing in the next wave of prosperity. There’s a lot of organizing, educating and lobbying to be done in the next few years if we are to have any hope of maintaining what’s left the character of the early years of Las Vegas. These Mid Century Modern classics are part of what makes the urban core feel so different from the suburbs. If we’re to save the homes and neighborhoods, we need to protect the commercial architecture as well.