City Life is out today with its heros for 2008. We’re most pleased to report that we made the cut!

Below is the segment of the article that recognizes our efforts to “Save The Huntridge”. There’s other heros being recognized, and I hope you’ll click this link to read the entire article in City Life Magazine

Save the Huntridge Group 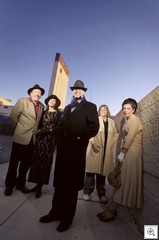 IN Las Vegas, preserving history is an idealistic cause that sometimes requires radical action. And when a group of downtown history buffs heard the Huntridge Theater might be razed, they took just such a radical route: They traded in their idealism for pragmatism.

“The coolest thing about saving the Huntridge is that we didn’t have to fight,” says Brian Paco Alvarez, an urban historian and member of Save the Huntridge. “It was actually of us sitting down and being realistic and very pragmatic and coming to an agreement with the property owner. We took a more conservative approach, and it worked.”

What didn’t work was hewing to the quixotic notion that the long-shuttered theater should reopen only as an entertainment venue. Between the costs of rehabbing a delicate building and a rash of competing clubs that sprung up in the ’90s, owner Eli Mizrachi couldn’t make it pencil out as a venue. The options: Remain a dim, empty monument to history, or bring the building back to life in a reimagined form.

“The Huntridge of the ’90s was a great concert venue, but it never made any money,” says Alvarez. He should know the sting of a big show gone bust: He put on a few shows at the Huntridge and didn’t exactly walk away with a suitcase full of cash. “The reality is that a theater isn’t going to work.”

With the blessing of the Save the Huntridge group, in August, the building’s owner, Eli Mizrachi, announced plans to revamp the Huntridge as a commercial retail building. The city approved his plans last month, and now Mizrachi is scouting for tenants.

The history wonk’s term for it is “adaptive reuse.” The layman’s term is compromise.

“One of the best parts of the process was working with Eli so he realized we weren’t trying to tie his hands,” says Lynn Zook, another member of Save the Huntridge. “We didn’t come at him going, ‘You must do this.’ It was about what we could do to make it viable for him and still keep the building.”

So, there’s one happy ending for preservationists — and some valuable lessons learned for future battles in saving Southern Nevada history from the wrecking ball.

“The great lesson to be learned with the Huntridge is that we can save these old structures by sitting down, being open-minded and really coming up with plans that the majority of people will be pleased with,” says Alvarez. “When the project gets finished, not only will it be the most beautiful building in the area, but what it will do for the redevelopment of the neighborhood and that corridor will be immense.” Historic, you might say.

The picture taking session was most amusing, as it was taken on Sunday afternoon when it was about 35 degrees. We were shivering and huddled together for every picture except this one.

Personally, I want to thank everyone who wrote letters, attended planning and council meetings and helped us with so many projects throughout the year. Volunteering to make our lives and our neighborhoods better is a great idea, and I highly recommend it for your New Year’s Resolutions. You’ll meet some great people, help save some architecturally or historically important buildings, and you’ll find you really like living in a Vintage Vegas that has charm and character and history.