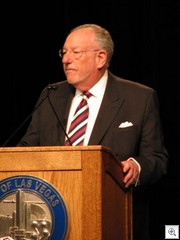 Mayor Goodman spoke briefly about things that had been accomplished in the City of Las Vegas over the last year. Except for brief remarks about Union Park, the Lou Ruvo Brain Center, the 5th Street School andÂ The Jewelry Mart, there didnâ€™t seem to be much to be bragging about.

If last yearsÂ theme was sustainability, then this yearâ€™s would have to be labeled asÂ â€œsurvivablityâ€. The message was that â€œweâ€™ll get thru thisâ€. His Honor pledged to never lose site of the official visionÂ to transform the city into a â€œworld class cityâ€. His remarks were surprisingly brief, though he seemedÂ very healthy and robust in his presentation.

TheÂ reception afterwards was sparceÂ which was appropos to the budget situation. We did get to speak to Mayor Pro-tem Gary Reese, CouncilmanÂ Ken Wolfson, Judge Kerns, Gary Gray, Â Michael Cornwaithe and Jennifer Harrington, as well as sculptor Steven Ligouri and architect Ken Carlson. Mayor Goodman got caught up in press interviews, and never made it into the reception hall. 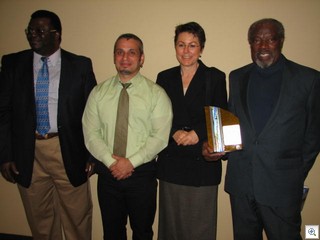 Our dear friend Denise Duarte, who has her gallery in the newly openedÂ Southern NevadaÂ Art Center at Neonopolis (which didnâ€™t get mentioned in the speech) was chosen as one of the recipients of the â€œurban design awardâ€. Their project, The Ancestral Gatewayâ€ is at the Doolittle Senior Center at Lake Meade and Martin Luther King.

The other Urban Design Award Winners were the Fremont East Entertainment District, and the MolaskyÂ Center in Union Park and the Historic 5th Street School.

You can watch the whole event on the cityâ€™s Channel 2. All of my photos are in a gallery at my Facebook Page.