Regular Reader Caroline Smith was the first to identify this home. It’s the “Cashman House” from 1959 on the corner of Birch and Waldman in the Scotch 80’s. The property is the back yard neighbor of Mayor Oscar Goodman’s home at Birch and Bannie. The Cashman Family were among the very first residents of Las Vegas, arriving in 1904. You’ve heard the Cashman name before. Cashman Cadillac/Buick, Cashman Equipment, Cashman Avenue.

Then, to my surprise, the current owner of the property, Gerry Shear also commented that

“As the owner of this wonderful home I can assure all that it is in the process of a masterful restoration.”

I love hearing words such as “masterful restoration”. I’ve been watching the progress on this home for several months now, and last night I had printed an 8×10 of the photo below, and was going to go leave it on the doorstep, and tell the owner about VVV. Turns out I don’t have to do that.

The property was built in 1959 by Jim Jr. and Mary Cashman.  Jim Jr. passed away a few years ago, but Mary is still running the family businesses, and has just opened an extraordinary facility for Cashman Equipment on St. Rose Parkway in the south end of the valley. Curt Carlson of SHarchitecture, the architect and lover of Mid Century Modern designed the building. You can tell that it sprang from the minds of two people (Mary and Curt) who never lost their modernist roots.

I have a folder of pictures from the new facility that I’ll need to hunt up. I’ll post them tomorrow.

There’s a terrific biography of James Cashman SR. in the “First 100” series. 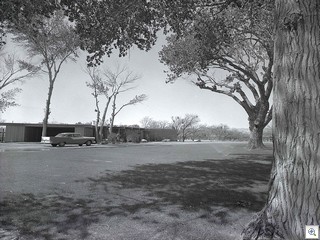 Here’s another mystery photo from the 1950’s. It’s also unmarked, and not dated.

I think I know which house it is, but I’m not going to tell.

Anyone want to take a stab at figuring it out?

It’s interesting how big the foreground trees are, compared to the age of the house.

click on the photo to see a bigger version.