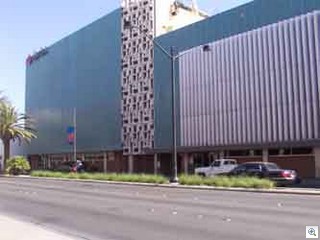 Regular Reader Tracey Brown gets a hat tip for finding this old website from Central Telephone. It shows some of the phone switching buildings, and makes reference to only some of the old letter exchanges.

So I ask â€” were there others? When did they stop using the alpha prefixes? I know they werenâ€™t in use in 1985 when I came to town.

By the way, the main switch building shown above is one of my favorite commercial mid mods in all of Las Vegas.

Hereâ€™s a few closeups of the decorative concrete tower on the front of the building. (theyâ€™re clickable to see them as full sized images)

Donâ€™t ask me why the VVVÂ blog program justÂ switched fonts and font sizes on me in the middle of this, and do click on the front page of The Central Office which is a tribute website to the Central Telephone Company which later became Sprint, and is now part of Embarq. Thereâ€™s lots ofÂ pictures and infoÂ buried in there about telephone switching, if youâ€™re inclined to do some surfing on the subject. Â Â