There’s so much history in the Las Vegas. We’ve got terrific groups and people who are trying to keep it alive. Classic Las Vegas is one of them. Lynn Zook gets a couple of mentions today since she’s the blogger at the Classic Las Vegas Blog. It’s a must read.

Lynn gets a special call out today, as she’s going to be the FAN PROGRAMMER next Wednesday on Turner Classic Movies (Cable 40) at 9pm on Wednesday April 15. Mail your taxes early, and rush home to watch Lynn as she introduces John Ford’s “She Wore a Yellow Ribbon”.

Robert Osborne and Lynn will talk about the movie both before and after. 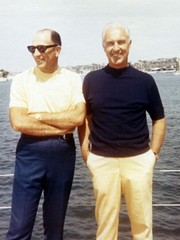 There’s several stories that I’ve never heard before. It was written by Karen Mack, who’s father was Jerry Mack. You probably only know his name because of the Thomas and Mack Center. There’s usually a good story behind behind the people that buildings are named after. This article is full of them.

Here’s some snippets, but you’ll enjoy the whole article for it’s details, timelines and lively style.

It was the mid ’60s—a colorful time. We lived in a pink stucco house near 6th and Oakey, had desert tortoises as pets and plucked scorpions out of our sandboxes. Our neighbors were named “Ice Pick” and “Boscoe” and “the Man.” Teens would race pickups to Sunrise Mountain, and my Girl Scout troop rode horses. The Rat Pack hung out in the Sands steam room. Howard Hughes hadn’t begun his buying spree. Mobsters were skimming casinos, and our French class had its annual brunch in a coffee shop with one of the showgirls from Le Lido de Paris as our “special” guest.

That change in the law—a monumental feat at the time but a bill most Nevadans didn’t even notice—was exactly what made Vegas what it is today. That is the Big Secret. Without it, Vegas would still be in the dark ages. Parry and Jerry knew if they brought in corporate gaming, it would bring in the SEC—the laws of full disclosure and federal prosecution—and that, in itself, would eventually chase the mob out of town.