TRAVEL BACK IN TIME TO 1969 AS FREMONT STREET EXPERIENCE PRESENTS 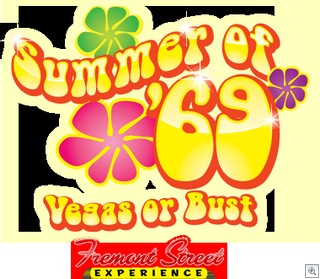 Fremont Street Experience will transform itself for the 40th anniversary of 1969 by taking visitors back to the legendary year. The “Summer of ’69: Vegas or Bust” event series kicks off Memorial Day weekend and continues 108 days through Labor Day weekend.  All summer long, themed nightly entertainment will also include cover bands and tribute artists, theatrical performances with costumed entertainers, new Viva Vision shows paying tribute to the year 1969 and special guest appearances. All concerts and entertainment are free to the public.

“We invite everyone to celebrate the 40th anniversary of the iconic and influential year 1969,” said Fremont Street Experience President Jeff Victor.  “Fremont Street Experience is presenting an impressive line-up of major music artists from 1969 to the public at no cost.  It will be a groovy summer of music, entertainment and lots of fun.  With downtown Las Vegas consistently offering great deals on rooms, dining and entertainment, there is no better vacation spot to have a great time at a great value.”

“Memorial Day Weekend: Celebrate & Remember” brings a military tribute to Fremont Street Experience and kicks off the “Summer of ’69: Vegas or Bust” event series. The event begins Saturday, May 23 and goes through Monday, May 25 and will honor past and current members of the military who have served the United States. Special guest performers include The Guess Who on Saturday, May 23 and Blood, Sweat & Tears on Sunday, May 24.

“One Giant Leap: 40th Anniversary of Moon Landing” will mark the historic event of mankind, commemorating the launch of Apollo 11 on Thursday, July 16, the landing on the moon on Monday, July 20, then splashdown back on Earth. Special “moon landing” concerts will feature Jefferson Starship on Saturday, July 18 and The 5th Dimension on Saturday, July 25.

“Woodstock TributePalooza: 40th Anniversary of Woodstock” will relive that historic music festival from August 1969. Fremont Street Experience will bring the best tribute artists from around the country to Las Vegas to pay homage to Jimi Hendrix, Janis Joplin, The Who, Joe Cocker, The Grateful Dead and others from Friday, August 14 through Sunday, August 16. They will take the crowd back to the heyday of true feel-good music.

“Labor Day Weekend: End of Summer, What a Bummer Bash” will close the summer concert series the weekend of Friday, September 4 through Monday, September 7. Highlighting the weekend will be concerts by Canned Heat on Saturday, Sept. 5, and Three Dog Night on Sunday, Sept. 6.

All events are free and open to the public.  For complete information, go to www.vegasexperience.com/summerof69