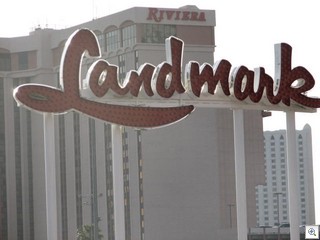 The Landmark sign from the Neon Museum has been moved back to near its original location; well at least within a few feet from where it originally stood.

It is now located on Paradise just North of the Convention Center Skywalk on the Westside of the street. It will be part of the new “art bus shelter” designed by Catherine Borg. 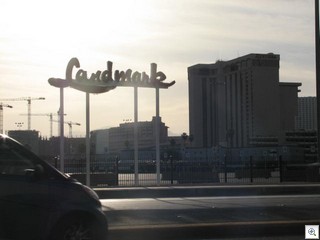 Thanks to Brian Paco Alvarez for the heads up.

Paco challenged a couple of us to see who could blog it first. I won, technically, but the rules changed. I posted the text Wednesday afternoon, but Paco says I have to put up a picture. Grabbing it at 5pm on Paradise wasn’t easy, but I pulled it off, and then forgot to rush home to put the picture into the story. Now that I look at the other blogs, I STILL WIN!

I’m very happy to see the city, county and Regional Transportation Commission embracing our history and heritage, as well as mid century modern artist expression, as they move forward. This is another sign of great progress. Under the sign will be one of the new ACE bus shelters which I told you about last week.

More than half the population of Las Vegas arrived after the Landmark was imploded in 1995, so they probably don’t remember that it was aptly named as the landmark that was visible from all over the valley. For your viewing pleasure….