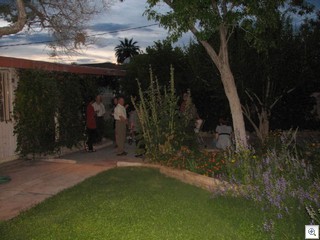 Saturday Night’s Flamingo Club Cocktail Party was held in one of the most delightful backyards in VintageVegas. Our hosts were John and Miriam, who are 48 year residents of Paradise Plaza, which is one of the smaller subdivisions that make up the Beverly Green Neighborhood Association. They’ve promised me that I can come back in the daytime to get better pictures, since it was just moments before dark when I got there. 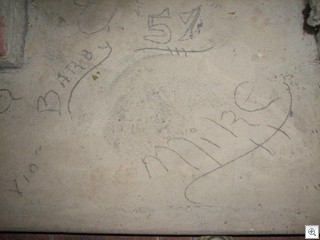 One of the most fascinating things in the yard is the 1957 petroglyphs in the cement porch. 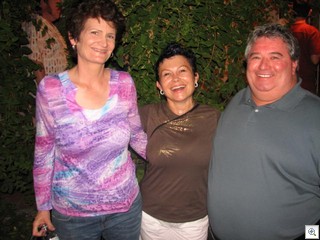 Planning Commissioner Steve Evans with Princess Ann and Pam Roberts. Pam told us the fascinating story of her mother Aggie Roberts, who, for many years was the resident horticulturalist for the Nevada Coopertative Extension, and did the gardening section every week on the original Sunday Morning “House Detective” real estate show. There’s much written about her, since she was one of the more colorful characters of Las Vegas. She passed away 2 years ago.

Aggie always made the point that you can grow anything in the desert if you give it enough water! The yard we were in for the party was certainly proof. I met her several times when I had various listings of mine featured on the House Detective.

The Flamingo Club is a monthly cocktail party held at a different home each month. I’d love to see the idea spread to other neighborhoods. The Motto of the Flamingo Club is “building community – one cocktail party at a time”.  If you think your neighborhood could benefit from something like this, then let me know, and I’m sure we can provide you a blueprint of how to get it going.