Cute As Can Be In Ridgeview 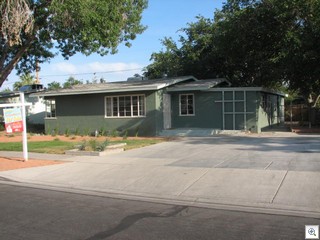 Ridgeview is small pocket of 86 homes in the northwest corner of 15th and Oakey. There’s homes on Oakey, 15th, Griffith, Bracken, Sweeney, Wengert and Franklin. On the east/west streets, all of the addresses are in the 1400 to 1500 block. It’s a quiet, generally well cared for neighborhood. All of the homes were built on crawl spaces, and it’s one of the neighborhoods where I count on finding original hardwood floors, even if they’re hiding under the carpet.

I have new listing at 1412 Wengert in Ridgeview. It’s one of the first properties being listed that were bought as a “bombed out” bank owned repo, and then fixed up for re-sale. As we can see by the flood of for rent signs in front of most of the bank owned properties that have been sold recently, this is a new twist to the market, and another good sign that the market is changing in the historic neighborhoods.

As the final touches being done on the remodel, I put up the sign, and thought I had a few days to find the right buyer before it went into the MLS. Within hours, the sign generated an offer, and when I put it into the MLS it was under the “contingent sale” status.

Things didn’t quite work out, however, and a month later, I’ve put it back on the market, and want to share it with you. 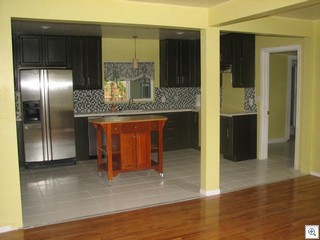 The reason it sold so quickly the first time, besides it being a really nice home now, is that the first buyer had spent countless hours trying to buy a home direct from the bank. She got shut out numerous times. Instead of fixing up one of the beat-up abused and neglected bank homes, she’d just get one that was already finished.

There aren’t a lot of “second chances” in this market, but in this case…….

The thing is, is that there’s actually a shortage of inventory compared to the volume of buyers – both first time and investor. In the “downtown district” between Sahara and Charleston, and from LVBS to Eastern, there’s only 50 properties available. At the peak of the downturn last August, there were 112.

16 of the 50 are priced at over 200,000, which is well outside of the range of the average or typical  average buyer at the moment, though there’s some interesting big houses in that group. There’s 4 listings under 60,000, and everyone of them has multiple offers. All 4 are cash only, and not currently in livable condition. They’re still in available status, because the listing agent isn’t taking advantage of the new contingency field, which is called “subject to bank signatures. They’re essentially already sold, but the final signatures haven’t been acquired.

Only 16 of the 50 homes are bank owned. 12 of them have offers that are being negotiated or already verbally accepted. The numbers are similar in other historic areas including the west side, (McNeil, Glen Heather, all the “ranchos”).

ALL of the lower priced listings right now are short sales, meaning the seller hasn’t lost the property yet, and is selling for less than the amount owed. We have rules about short sales. Some of those 16 are actually already sold, but the agent isn’t following the rules by putting it in contingent status. Many buyers shy away from the short sales because they’re unpredictable and frustrating. I’ve got 11 under contract for various buyers, but it’s not clear when or if or at what price the existing lender will agree to the deal that was made by the seller.

What’s the bottom line of all that? I have a MASSIVE shortage of nice houses that aren’t bank owned or short sale. There’s pent up demand for nice livable houses that can’t be satisfied with the current shortage of inventory. I think it’s time for some of the folks who “aren’t going to give their houses away” to give me a call. We may have to fight tooth and nail to get the appraisals to come in, but it won’t be hard to find a qualified, ready and anxious buyer.