I rarely ever manage to be as snarky as our friend Andrew Kiraly at CityLife. He topped himself today.

I was told that the one single lone wall of Maude Frazier Hall – the VERY first building on the UNLV campus had been left, and was going to be a tribute to her. But WTF?

I’m not supposed to copy and paste entire blogposts – just a snipit and a link, but this one deserves to be seen in its entirety.

We’ve done a lot of coverage about Maude Frazier and despicable destruction of Maude Frazier Hall. It was designed by the locally famous architectural team of Zick and Sharp. We’re doing a bus tour/lecture/roundtable (along with Classic Las Vegas) about Zick and Sharp in October. 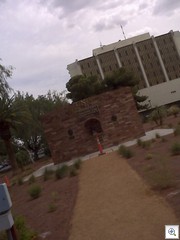 Thanks for everything, Maude. Here’s a pile of rocky vomitus to celebrate your legacy!

Okay, so Maude Frazier Hall wasn’t exactly a campus hottie in terms of architecturally delighting the eye. And when UNLV’s bumbling current powers that be soothed critics with sweet something-or-others about erecting a “memorial wall” in the razed building’s place, a wall that would pay proper homage to UNLV’s mommy, I thought, okay, I’ll give them the benefit of the doubt. I’d since seen the memorial wall through my car window as I was zipping by, and figured the burl of fencing around the project meant the wall was a work in progress.

Then I was strolling through UNLV the other day and this mini-monstrosity hooked my eyeballs in its full glory. Work in progress? Hello! More like JERK IN PROGRESS. Turns out this is actually the complete project. I’m no architecture critic, but it looks like whoever made this thing lifted a pallet of sandstone facade from a Summerlin strip mall and played a solo match of Jenga on the campus lawn.

If they were going to knock down a historic building — perhaps a true prince waiting to bust out of frogdom — they could have at least created a memorial wall that truly engages and reflects Frazier’s place both in the history of UNLV and the Las Vegas Valley. But this slapdash stack just ain’t cutting it.

On the upside, it looks like it was inexpensive to produce. So it shouldn’t prove too much heartbreak on UNLV’s wallet to tear it down — and try again.