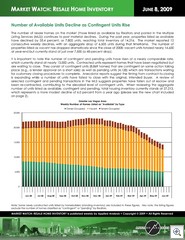 These charts and statistics don’t seem to match what we here on the national news, proving the point that “all real estate is local”. In fact it even goes deeper than that. There’s differences in areas even within a city.

For example, the bulk of the current listings are in the suburban ring. The city wide inventory has shrunk by 35% from a year ago. In the Vintage Vegas area that I routinely cover the inventory drop is about 60% since last summer. In fact, in the entire coverage area there’s only 356 Single Family homes on the market today. That’s not much for an area the covers about 20 square miles in the heart of the valley. In the same area, there’s 246 properties under contract. That’s a 68% listing to contract ratio. 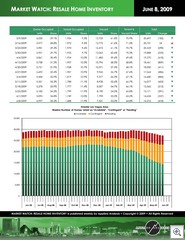 Among the 356 available single family homes, ONLY (are you ready – since this isn’t what you’d be led to believe on the news) 76 of them are bank owned, and I know for a fact that there’s multiple offers already on many of them.

I’m currently working with 22 buyers. I’m just one guy. I hear there’s other agents out there as well. Some of them are actually still working at selling real estate.

Here’s the break down of how many “regular sellers” are in each price group.

There’s some new sales that are under contract that are going to be creating new and better comps to use on the appraisals. Many are selling at above the list prices. The bottom line, is that now that the bottom has passed us by…. IF YOU’VE BEEN WISHING TO MOVE UP, NOW MIGHT BE THE RIGHT TIME. Lots of competition for your home among the first time homebuyers, lesser competition against you for that bigger home you’ve been wishing for. Economically, you’ll end up even for the moment, and you can watch the market come back in the house you’ve been wanting. Give me a call if you’ve been cramped up for too long.

Here’s a map of what I generally refer to as VeryVintageVegas. Some parts of it are more vintage than other parts. Almost all of it falls under the category of Mid Century Modern.

There are lots of interesting 50’s and 60’s neighborhoods that aren’t on this map. Before anyone jumps up and down about Charleston Heights or Winterwood or Henderson or North Las Vegas, believe me I know about them, talk about them, and offer them as alternative all the time. But this maps shows what I believe to be the “urban core” since it contains the strip, downtown and UNLV, is predominantly owner occupied, and has